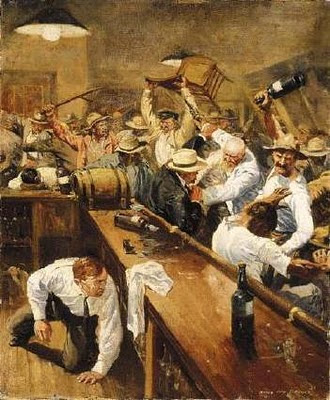 Here. And Alvie at The Cliffs of Insanity proves him right. Alvie writes to Arizona Governor Brewer:

I note with satisfaction your countersuit against the Federal Government for their mishandling of U.S. border security. Brava, governor! This country was founded by sovereign states. States again need to assert this sovereignty-especially when Federal policy is being implemented with injury to the states.


I am writing you to offer you another source of fuel that may help your lawsuit.

There is an ongoing investigation into credible allegations that the Bureau of Alcohol Tobacco Firearms and Explosives (ATF) has given implicit and/or explicit approval to the moving of guns purchased in the US to Mexico. This was done to pad statistics used to further expand ATF's power, budget, and objectives. This was done without advising Mexican authorities. This has been done in spite of internal ATF protests which have been overruled by ATF management. Further, one of the guns used in operation was involved in a December 2010 incident where Border Patrol Agent Brian Terry was killed.

Go and read the rest. Obviously Alvie has internalized David's signature motto: "Any chair in a bar fight."

Outstanding. Anyone else willing to follow up and help Governor Brewer pick up on the Project Gunwalker scandal?
Posted by Dutchman6 at 11:36 AM

Just did by phone and by email. Linked back to here too.

It's apparent the O Team had high hopes to planting Traver as head of ATF, and then advancing regulations to "stop the violence in Mexico."

You and David and a few others seem to have put some royal kinks in the planned chain of events.