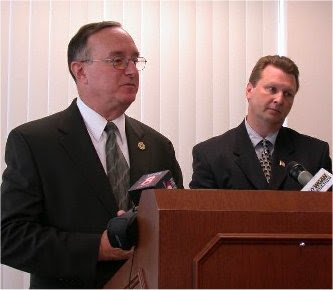 Information about Calderon’s inner circle being involved would also have been known by William Hoover, ATF’s Assistant Director for Field Operations and Anthony P. Placido, DEA’s Assistant Administrator for Intelligence Division, at the time of their statement before the United States Senate Committee on the Judiciary, Subcommitee on Crime and Drugs, concerning “Law enforcement responses to Mexican drug cartels,” presented March 17, 2009 (over a week before Clinton’s statement on the situation).

Yet here is what Hoover and Placido told the subcommittee, while testifying "the greatest proportion of firearms trafficked to Mexico originate out of the U.S. along the southwest border":

Internationally, the Department enjoys a strong collaborative relationship with law enforcement and other government agencies within Mexico and throughout the world. The Department would not have achieved the success it has without the remarkable support and courageous actions of the Mexican government.

Was that joint agency statement provided under oath?

In re testifying about “a strong collaborative relationship,” will investigations find that a decision to keep the Mexican government uniformed about “gun walking” operations was already either under discussion or in practice (note that Jaime Avila, who purchased the weapons found at Border Patrol agent Brian Terry’s murder scene, was documented as being under government surveillance in late 2009)?

Noting tie-ins not only with the highest levels in both the Justice and State Departments, as well as within his own government with its ruthless cartel connections, is it any wonder the Mexican spokesman didn’t want to say any more than he did?

It is in the corrupt Mexican govt's best interest to maintain the inefficient status quo with American ATF.
Propping puppets.

If you put any importance in the North American Union as a potential threat then one must assume that the mexican govt would have to be complicit up to their eyeballs in promoting civilian disarmament of their new homeland.. that being true it makes perfect sense that Calderone would ignore the investigation.

One thing certain about liars. Even the most intelligent of the bunch will eventually screw up and tell a different story. It's inevitable. The longer the fable goes on and the longer the fable has to be explained, the better the opportunity for a clusterflop.

Patience and documentation will nail them every single time. Or should I say, they'll nail themselves?

History repeats itself. These liars got there training from Oliver North. This is the modern version of Iran-Contra workshop. All OFFICIALS involved in Gunwalker are compromised. The crooked mexican will come' merde if U.S. officials back peddle.