T.J. Bonner: Missing in Action in the Project Gunwalker Scandal and the cover-up of the circumstances of Brian Terry's murder. 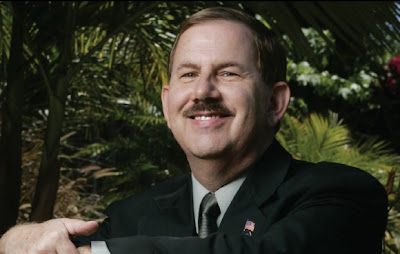 Why is this man smiling?

One of the most curious aspects to me of the cover-up of the circumstances of the death of Customs and Border Patrol Agent Brian Terry is the absolute silence of his union, the National Border Patrol Council and that organization's normally high-profile leader, T.J. Bonner.

It is not as if the NBPC didn't get the memo. They devote some space on their website in the section called In Memoriam to his death, which includes this icon of mourning:

Yet it is a curious mourning, is it not, that makes much of burying a man who died in service to his country while being deliberately mum upon the scandalous circumstances of his death?

According to our sources, CBP agents are seething with anger over Project Gunwalker and the death of their fellow agent. We also hear that the line agents are more than a little upset at Bonner's silence. He cannot plead ignorance. I have myself sent Senator Grassley's letters to Bonner via email asking for his comment. He has not responded. I have often suggested to reporters that they seek out Bonner for comment. Yet he has not commented.

What accounts for his silence?

Is he, too, afraid of meeting the man upon the stair?

Does he not owe the family of Brian Terry at least the courtesy of the slender risk of his reputation to demand simple justice and a full accounting of the murder of one of his union's members? What is he afraid of, that Janet Napolitano won't invite him to tea?

If you would like an answer to this question and others, here is how you can send Bonner and the board of NBPC a message. Ask Bonner and his crew yourself.

If you get an answer it is more than the press, me or the ghost of Brian Terry have been able to get out of him up until now.

Mike Vanderboegh
III
Posted by Dutchman6 at 8:07 AM

Nothing "curious" about the silence from NBPC and Bonner. When I first saw his picture - BEFORE I even knew he was the head of NBPC - I immediately stamped "politician" across his mug shot. OF COURSE he isn't saying anything. That might cost him prestige points with DHS. Might get him bounced from the guest list for VIP gatherings. He might never get to wear his tux again.

I'll ask a couple of CBP Agents have run across here on the border,if enough of the Field Agents put up a stink maybe Bonner will get off his ass, doubtful as CBP Field Personel gave a vote of "No Confidence" to their Upper Echelon just like the "good guys"???? at ATF.

Sent this to Bonner:

As a former San Diego police officer who worked San Ysidro and the border, I met some fine Border Agents, good men. I guess you call them Patrol Agents now.

When are you going to add your voice to those asking why Brian Terry died at the end of a rifle that BATFE allowed to get into the wrong hands? Do you support your agents, or don't you? Your silence so far is demeaning. I'm sure your union members think so, too.

When I worked at the VA, most of our union stewards and admin were blowhards, too. Fortunately, we weren't forced to join. AFGE sucks, but it is a union, so forgive me for being redundant.

He doesn't want to upset his "friends."

If this is the type of representation these people have then they need to decertify and get new reps.

"It just doesn't make any sense to me or Border Patrol agents that I've talked to," Bonner said. Drug cartels "may have gotten weapons elsewhere, but why make it easy for them?"

"There should be a full investigation into the whole Project Gunrunner. From all appearances, that program was out of control," he said.

Bonner said it is routine for law enforcement agencies to conduct controlled sales and purchases of contraband, but not to let guns go across the border, where they predictably could be used in crimes.

"What is the end game here? It's not clear in my mind," he said.