GOA issues Gunwalker Scandal Congressional Briefing Paper: "All right, you apes, so we took the frigging hill. Now we gotta take the next one." 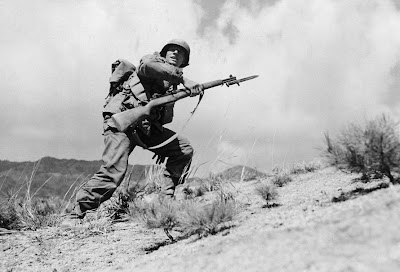 Remember day before yesterday when Larry Pratt came out swinging on the Gunwalker scandal?

On February 22, Gun Owners of America (GOA) president Larry Pratt appeared on America Live and presented a variety of misleading reasons for his opposition to Andrew Traver, President Obama's nominee to head up the Bureau of Alcohol, Tobacco, Firearms and Explosives (ATF). Pratt's objections during the segment were political in nature, wholly ignored Traver's distinguished record as a law enforcement officer and veered into far-flung accusations of criminal conspiracies by the ATF.

Then the CBS piece ran. Well, as David Codrea commented to me last night in a phone call regarding Collectivist Brown, "Sucks to be him."

Congratulations aside, I feel like the non-com whose battered squad has made it to the top of the hill and now realizes he's got to not only hold the ground he's taken, but push on to the next rise.

Gun Owners of America has just brought up some more ammo in this fight, so let's be fillin' up those ammo pouches, people. Drink water, and drive on.

This Congressional Briefing Paper sums up what we know up to now about the Gunwalker scandal. And for the next couple of days, a lot of your Congresscritters and Senators are at home, having taken this President's Day week off. That gives you two days to download the GOA brief, print copies and stuff them in your elected representatives' hands with a demand for hearings on Gunwalker.

Y'all have done magnificently up to this point. But we need to keep driving ahead. One media event doesn't move these critters.

"All right, you apes, so we took the frigging hill. Now we gotta take the next one."

Off your butts, people. We've got one more hill to climb. And quickly.

And be prepared for counterattack along the way.
Posted by Dutchman6 at 4:33 AM

175 years ago today, day two of the siege of the Alamo.

We're on the attack this time.

Great WarriorClass, I'm stuck at work but will call Farenthold's Brownsville office and "walk" em through the GoA site wish me luck.

Keep up the good work Dennis308! It's Texans like you that make this a great state! Continue the legacy.

God bless Texas! And leave us not forget Alabama, Ohio and wherever else, a patriot heart beats!

OK Dutchman, Mission Accomplished I spoke with Olivia at Congressman Farethold's Office 27th. Dist. TX and talked her through the GOA site to the "Gun-Walker" Section she said she would read the Article and Pass on the Information to the Congressman. That's all I can do for today as I am away from Home at this time and I have other Duties to perform....

I hope the good congressman does something with this information, cause I don't want to go to Jail for Punching him in the nose. Are ya reading this Blake.

Mike and David have done an excellent job of reporting this. Both of them should receive an journalist award for their efforts, although I'm not sure an award from a group of crooks to a couple of patriots really means anything.

Senator Grassley has also done a fair job in trying to get to the bottom of what happened.

Now for the BUT.

We have an executive and judicial branch that just refused to uphold a legally passed law and NOBODY is or will do anything about this Tyranny. You won't and I won't. This blatant violation of their oaths is far bigger than "gun walker." If you think anything will be done about either, you are living in a different location than reality. We will continue to cower in fear.

Hand-delivered a copy of the briefing paper to Congressman John Duncan's receptionist in Knoxville about an hour ago.