So, how was it again that Gandhian passive resistance won the day during the Civil Rights movement? Well, there were these armed guards, you see. . . 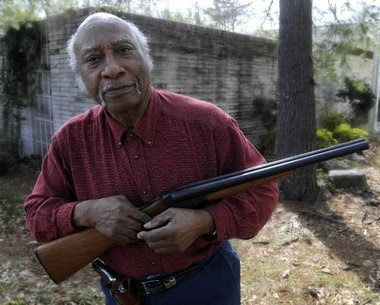 Note that these informal armed guards predated The Deacons for Defense and Justice by several years.

As he and Frank Dukes stood with guns in their hands outside a home in Smithfield, then called "Dynamite Hill" because of bombings targeting civil rights workers, Jonathan McPherson had no idea they were playing a part in history.

The home was a gathering spot for civil rights strategy sessions and with the help of McPherson and Dukes, who organized students at Miles College to conduct the 1962 boycott of segregated downtown stores, it gave Martin Luther King. Jr. a safe place to lay his head.

"We knew they'd throw bombs, so we decided if we saw someone so much as light a cigarette we were going to shoot," McPherson said.

McPherson says they weren't afraid they'd be overcome by those seeking to kill King. "The only thing we were concerned with was freedom, justice and equality."

I hope we all have enough time left to get to read this book,,,

And speaking of Books what is the latest up-date on the publishing of "Absolved" I want mine to be a autographed hard bound copy,if possible.And if there isn't gona be hard bound then I guess paper back will have to do....

Instant hero. This man is up there with Col. West. God bless him.

Yet another case in point for guns.

Ya, I'd be VERY interested in an autographed copy from the present day Samuel Adams. :)

That's a mighty short barrel on that shotgun, isn't it?

@Rexx - nope. That's a coach gun. And it looks like the overall gun length is at or just over the legal minimum.