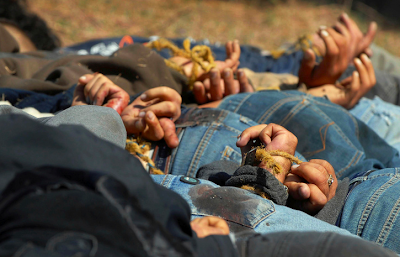 After all, "What's a few more nameless, faceless, dead Mexicans in the grand scheme of things?"

Even, it seems, to the Mexican government.

Last night our CBS News investigation reported on ATF's Project Gunrunner and allegations that it included a secret operation near the border that intentionally allowed thousands of assault rifles and other weapons to hit the streets.

Sources told us many of the weapons ended up in the hands of Mexico's drug cartels. Two AK-47 type assault rifles turned up at the murder of border patrol agent Brian Terry on December 14th.

Sources also told us that ATF agents operating in Mexico were instructed not to alert Mexican authorities about the operation.

The Mexican government responded today. Ricardo Alday, spokesman for the Mexican Embassy in Washington, D.C. said Mexico intends to continue to work with the U.S. to enhance intelligence and information sharing, and that Mexico "will continue to encourage more aggressive interdiction efforts on the U.S. side of the border."

Well, if they want to do that, they'd better hire the Minutemen. It's the federal government that is smuggling the damn firearms.
Posted by Dutchman6 at 5:18 PM

Ricardo Alday, spokesman for the Mexican Embassy in Washington, D.C. said Mexico intends to continue to work with the U.S. to enhance intelligence and information sharing, and that Mexico "will continue to encourage more aggressive interdiction efforts on the U.S. side of the border."

"Well, if they want to do that, they'd better hire the Minutemen. It's the federal government that is smuggling the damn firearms."

"Minutemen? Who needs minutemen? Send the money (and the goods) gringos!"

Mind you, that doesn't mean that the Mexican people got bribed.

1. Their own government could care less about the body count as long as the gringos pay tribute.

2. That the events in the Middle East show that even the lowliest people can successfully demand real change, particularly the events in Libya.

Or maybe not. It's easier to flee to the USA rather than stand and fight the dirtbags that are tearing Mexico apart.

Politically active familial on the wrong side of the fences cringes when I show up in a Minuteman hat or t-shirt and I get a lecture about Minutemen being lunatic fascists but when Minutemen spend time at the border with firearms they aren't smuggling them, whereas the Fed-gov often is-not counting all the arms they give the Mex Military and Police that get "lost". Therefore, Minutemen are BAD GUYS because of defending the border areas and not choosing to smuggle guns and Federal arms merchants are good guys, right?

Did I miss anything?