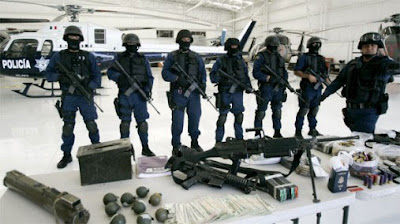 Yeah, I'm sure they got the M249 machine gun at a Phoenix gun show. Yup.

A deep genuflection and tip of the boonie hat to Irregular John P. for this link:

Pentagon Fingered as a Source of Narco-Firepower in Mexico.

No wonder ATF bosses felt like they had to boost their numbers to justify the existence of Project Gunrunner.

Another series of leaked State Department cables made public this week by WikiLeaks lend credence to investigative reports on gun trafficking and the drug war published by Narco News as far back as 2009.

The big battles in the drug war in Mexico are “not being fought with Saturday night specials, hobby rifles and hunting shotguns,” Narco News reported in March 2009, against the grain, at a time when the mainstream media was pushing a narrative that assigned the blame for the rising tide of weapons flowing into Mexico to U.S. gun stores and gun shows.

Rather, we reported at the time, “the drug trafficking organizations are now in possession of high-powered munitions in vast quantities that can’t be explained by the gun-show loophole.”

Those weapons, found in stashes seized by Mexican law enforcers and military over the past several years, include U.S.-military issued rifles, machine guns, grenade launchers and explosives. . .

But the State Department cables recently made public by WikiLeaks do seem to confirm that the U.S. government is very aware that much of the heavy firepower now in the hands of Mexican criminal organizations isn’t linked to mom-and-pop gun stores, but rather the result of blowback from U.S. arms-trading policies (both current and dating back to the Iran/Contra era) that put billions of dollars of deadly munitions into global trade stream annually.

As the death toll mounts in the drug war now raging in Mexico, it pays to remember that weapons trafficking, both government-sponsored and illegal, is a big business that feeds and profits off that carnage. Bellicose government policies, such as the U.S.-sponsored Merida Initiative, that are premised on further militarizing the effort to impose prohibition on civil society only serve to expand the profit margin on the bloodshed.

A very large tip of the hat to Mike, David and the courageous ATF whistleblowers.

I have not seen such outstanding investigative reporting in decades.

I smell a Pulitzer!

That is just SO FREAKING UNFAIR! Damned drug lords can buy U.S. made hand grenades and WE CAN'T. That is just totally unfair! Who's making the rules around here, anyway??
[removing tongue from cheek]

Not really surprised at any of this. Always figured the guns the cartels are using came into Mexico through completely legal channels. Too damned many of 'em for it to be otherwise.

And what the FRACK is a "gun show loophole"?? I have only been to a couple but people I saw buying guns there were filling out the same paperwork I had to when I bought my Glock or received my FNAR at Drury's. The place was positively CRAWLING with SAPD officers.

$100 says the Brady weenies never say anything about THOSE guns. Any takers?

I went to the Portland gun show looking for an M-240B. I was expecting to pay a couple of bucks, but would prefer getting a deal on a slightly used but complete unit. This is a model that can't be beat for recreational shooting, according to a buddy who was a convoy gunner in Iraq spring 2010. So, I have to go to a Mexican gun show to get one of these? The local Oregon National Guard armories never seem to sell their extra hardware.

You mean you can't just walk into an American gun store and walk out with fully automatic weapons, RPG's, and a bouquet of grenades?

Well ... who would have thunk?

Ollie North is smiling. Of that, I am sure.

Just pick a minor nit...
That's an M249 SAW, not an M240B. The carry handle and fully enclosed front sight are dead giveaways.
But M240 or M249, 7.62 or 5.56, that's still a relatively new, full-auto, real machinegun and it didn't come from a gun show or a local dealer. My guess would be that it came from the Mexican Army. They have soldiers deserting all the time, usually taking their personal weapons with them and often taking truck-loads of other weapons and materiel too.

All jokes aside, this much firepower in Cartel hands means at least a portion will be on American streets. Calculate accordingly...

I saw a article a while back saying that the cartels are buying U.S.(and other counties they found a stash in Guatemala)military weapons from Guatemala and further south, left-overs from Iran-Contra deals I would guess. That and there has been at least one conviction of a Policeman selling millitary grade weapons to a cartel in McAllen,Tx.

Hillary spent the better part of last year crossing the border almost every other week. You think she wasn't selling guns for Uncle Sam? And she turns around and points the finger at american gun owners for Class 3 hardware. Lying c##t!

HEY! You know what this means!

All these "unsporting" weapons are making their way north!