"Credibility. It's the only currency that means anything on this kind of playing field. Dean's got the tape and he's going to come out with it. And when he does, I want his credibility. I want people to know he's lying before they hear what he says." -- Jon Voight as Thomas Reynolds in Enemy of the State. 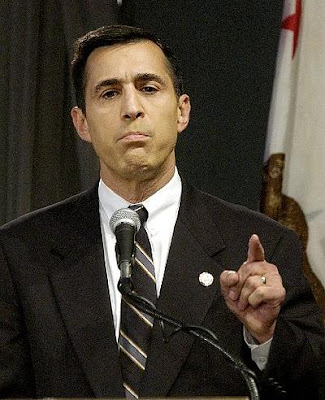 This is how they intend to defend against Project Gunwalker and other scandals.

Democrats are understandably obsessed with Darrell Issa — he’s built himself up as a one-man investigative machine aimed straight at the Obama presidency.

But a handful of liberal political operatives in California — including a former Hillary Clinton hand — are taking their anti-Issa passion to a whole new level, launching a nonprofit group, a website and even paid media advertisements aimed at undermining and investigating the rabble-rousing chairman of the House Oversight and Government Reform Committee.

They say they’re leaving no stone unturned in digging into Issa’s personal and business history. This week, the group will reveal more than 100 pages about an investigation into a fire that burned down a building that housed his business in the early 1980s.

The launch of this group — which calls itself The Third Lantern, and is naming the website the Issa Files — is remarkable because it’s wholly focused on the activities of one lawmaker who has no immediate plans to run for higher office. The purpose of this new group is to make public documents more public, make life difficult for Issa and sow seeds of doubt on his investigations.

They plan to run TV advertisements and other paid media in the future, saying they already have a “significant commitment” of cash. A spokesman for Issa, Kurt Bardella, dismissed the effort as a “misguided and distasteful smear campaign against Chairman Issa.”

The group will be run by the principals of SCN Strategies, a San Francisco-based consulting firm that produced ads last cycle for California’s Democratic Gov. Jerry Brown and Senate Majority Leader Harry Reid (D-Nev.). One of those deeply involved is Averell “Ace” Smith — who ran Hillary Clinton’s successful 2008 California and Texas primary operations and is known as one of the more cutthroat political operatives in the business.

Dan Newman of SCN Strategies, one of the three people leading the anti-Issa campaign, declines to disclose how much is being spent on the effort or who is bankrolling it, telling POLITICO it is being paid for by “patriotic Americans who don’t want to see the potential of an ethically challenged congressional investigator run amok with McCarthyesque fishing expeditions.”

The structure of the organization does not require that it disclose its funding.

But the goal is clear: Newman, Smith and the third partner, Sean Clegg, want to raise enough questions about Issa’s background and personal history that anything he turns up in probes of the Obama administration will be immediately discredited.

It's rapidly approaching the time for this country's God Damned pigs to rot in hell for what they have done.

Those Democrat operatives from California are still having rectal smarting from the successful recall election that removed Gray Davis as governor, giving them Arnold Schwarzenegger. The real conservative, Tom McClintock, came in second, sadly.

Darrell Issa funded a large part of the recall petition signature gathering to get the recall on the ballot.

So, yes, Issa is in their sights, but that's not new.

There was a time, a better time in my estimation, when such dishonorable muck racking was dealt with more ... directly.

Perhaps we shall live long enough to see the return of those times. We endure only so much of this as we are so inclined. There is no law that dictates we endure one "cute" lie more.

More effort to protect the anointed one.