Looks like Grassley's office ain't buying the stonewall on the Project Gunwalker Scandal. Five questions for the Congress to ask under oath. Stone wall crumbling at the corners.

Grassley spokeswoman Beth Pellett Levine said the Justice Department denied one aspect of allegations presented by whistleblowers and promised to give the senator a briefing. "However, the briefing has still not occurred, and documents provided with the allegations are not consistent with that denial," she said. "There are many specific questions that need to be answered in full by the Justice Department as soon as possible."

Meanwhile, our sources within ATF confidently stood by the whistleblowers' narrative and uniformly scoffed -- some profanely and obscenely -- at the DOJ letter's fig leaf of the word "sanctioned," comparing it to the Clintonian use of "sexual relations" or the definition of "what 'is' is."

A long-time observer of DC in general and the ATF in particular had this reaction:

The letter is supposed to create layers of deniability and create a distraction via the insult mechanism (i.e., get you to react to and focus on the insult rather than salient facts or questions). I doubt Lanny Breuer is going to come near this. And the point about Melson not responding to the letter is more than telling; Melson may not have had a choice, consider that.

Some questions that occur to me, in no particular order of importance:

1. Has the gun used to murder Border Patrol agent Brian Terry been identified? If so, on what evidentiary basis, including ballistic evidence. If the gun has been identified, the two key questions: (A) has this gun ever been traced before? (B) if so, what do the traces show?

2. What are the locations in Mexico where "gunwalked" firearms were recovered?

3. Were any "gunwalked" firearms used to murder anybody in Mexico? If so, who? Again the Goat (Copulation) questions: (A) have any of these guns ever been traced before? (B) if so, what do the traces show?

[nota bene: I am making a distinction here between ATF and DOJ as institutions, in asking these questions]

5. For each of the 274 firearms recovered in Mexico, describe the extent, if any, to which Mexican authorities were advised these firearms had been transported to Mexico with the knowledge of ATF.

I can't wait to be sitting in gallery when they are asked -- under oath. 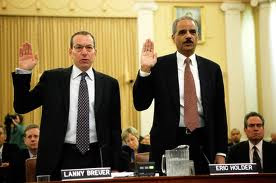 Holder (Sotto voce): "I'm telling them the whole damn thing was your fault." Breuer: (Voice rising): "Bullshit, if you sell me we're both going down."
Posted by Dutchman6 at 5:11 AM

DOJ's statement was tightly worded, narrow in scope. And it sure took a long time for it to come about.

That suggest anything to you?

I watched the Waco Congressional hearings, and ATF lie under oath.

What's another broken oath to an oathbreaker?

Death to Tyrants and Traitors.