Chinese stick it in Obama's eye.

Chinese Pianist Plays Propaganda Tune at White House. US humiliated in eyes of Chinese by song used to inspire anti-Americanism.

Maybe next time Obama gets to Beijing, someone can sneak in Jim Daleo's song written to the tune of "The Wreck of the Old 97." Jim completed 86 combat missions in Korea, flying P-51 Mustangs and F-86's. A flight leader in the 509th Fighter Bomber Squadron, he was killed in the crash of an F-86F while on landing approach at Langley AFB, VA., 7 September 1954.

It's a long, long road from Pusan to Pyong-yang
And the mountains are high and wide
If my engine quits, you can write off a Mustang
Cause I'm fixing to go over the side!

Col. McBride led his boys on a mission
and the Chinks started throwing up flak
He said, "Gun 'em up, boys, and we'll clean out our engines,
And the drinks are on the last one to get back."

So you hit the silk and you land in a meadow
And the Chinks start blazing away
And a 'copter comes along and picks up your elbow
Registration boys will find the rest some day.

It's a damn fine war and I love every mission
And I guess I'm Here to stay
But I'd rather shag a broad by suggestive coition
Or catch the clap in old Santa Fe. 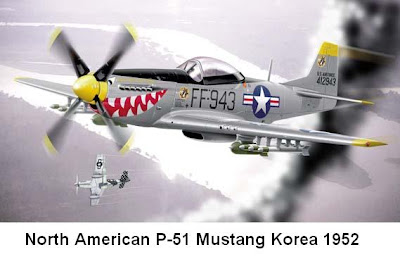 And Obammy, with full knowledge of what was happening, applauded enthusiastically, right? Did he remember to bow?

Do you REALLY think they stuck it in Obama's eye? Or did they AND The One stick it in OUR eye?

I understand that this Ling is a Chinese citizen living in NYC on a visa. Revoke his visa and send his Red yellow a$$ back to China.

I wish I could say "unbelievable" but - sadly - it's all TOO believable...

God help us - and God Save Our Republic!

Better get used to American "humiliation" before China. There'll be lots more of this in the coming years. It's called "your run at the top of the global heap is over, USA, hope you enjoyed it." Adult Americans recognize that this is the way history works and they will adjust. Things'll be tougher for the big children who cannot fathom a life in which they don't get to be the bully anymore but instead have to cooperate and play nice with others.

Indeed, a joint effort, they stuck it in our eye.

For Anonymous at 12:05 PM:
AS IF The One and his toadies would do ANY SUCH THING! You need to understand that Mr. Lang is now the hottest item on the New York City party list. ALL the events that are worth attending will undoubtedly feature him prominently.

That is why I won't mourn if the Religion of Peace removes that place from the map.

OK, Mike, I assume you are writing those posts again to amuse us, id est the "Anonny Nonny" at 2.05 pm. That was a joke, right? Saying that the USA should 'play nice"?? Like the ragheads, the Chi-coms and other great champions of playing nice? Killing off everyobne who speaks in dissent, forcing women to abort their babies, declaring what you may or may not own, deciding when you do not qualify for health care ( hmm...like Obama's Death Panels, oui? ), deciding what factory job you will work and for how many hours and how much poay... declaring what religion you will practice, unless you want to be beheaded or burned alive or stoned to death... Yep! THAT's the kind of life to be envied!!
but... but... ever notice that the leftist assholes, especially the richest, in Hollyweird and environs, who honestly HATE the USA and HATE the people who made them rich... are NEVER, EVER willing to get the Hell out of here and go live in their Worker's paradises, like Cuba, China, North Korea, Saudi Arabia, Iran... nope! They might have to live according to their words, and that would never do!
Effing idiots, all.

...but instead have to cooperate and play nice with others.

I give you the joy of cooperating and playing nice with the Chinese Communist government. Ask the Tibetans how nice they play.

Note to all --- The "china scare" is exactly what they want. The people fearing china because of our debt. Mass Fear results in mass subjugation. Obama et al are communist first, Americans last. ---- Remember China only holds 20.6% of our debt. So why aren't we bowing to Japan (20.18%)or the UK (11.7%)? Why aren't we fearing the Japanese katana or the dreaded long bow instead? Hmmm...? Could this all be a sinister plan?

The heavy majority of our debt is with friendly nations -- not communist scum.

Remember this the next time you hear someone extol on about our subservient position with china.