Dyspepsia refers to a condition of impaired digestion. It is a medical condition characterized by chronic or recurrent pain in the upper abdomen, upper abdominal fullness and feeling full earlier than expected when eating. It can be accompanied by bloating, belching, nausea, or heartburn. -- Wikipedia. 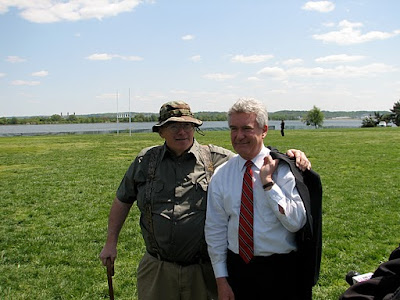 Me and Paul. If that ain't dyspepsia written all over his face, I don't know what is.

“If the president could address the issue in the State of the Union that would be really important,” says Paul Helmke, president of the Washington, D.C.-based Brady Campaign to Prevent Gun Violence, a major gun control group.

“If he could announce his support for the high-capacity clip legislation that would be the best thing. The next best thing would be for him to support a presidential commission to study gun violence,” adds Helmke, the former mayor of Ft. Wayne, Ind. “But he can’t stay silent. Either way he’s just got to do something.”

And I always love it when a citizen disarmament advocate says something really stupid:

“We’re not even talking about gun control here, we’re talking about limiting these crazy high-capacity clips,” Bishop added. “I don’t see how any reasonable person can oppose what we’re trying to do here. These clips aren’t used for hunting, unless you are talking about taking out a seriously energetic deer.”

No, you stupid collectivist moke, they're not used for hunting fuzzy four legged animals. And what part of the Second Amendment refers to hunting, exactly?
Posted by Dutchman6 at 6:17 AM

Listening to these eediots talk about "clips" makes MY stomach hurt. Can't somebody drop him for twenty push-ups or something?

Glenn Beck made an excellent point today. The progressives don't use Nazi tactics, the Nazis used tactics they borrowed from early progressives.

Apparently Obama wants to make sure he has at least a marginal chance at getting re-elected.

Or at least an advisor talked some sense into him.

Passing a strict gun control bill would just galvanize the right and upset the center. The left wouldn't be happy since any measure short of full confiscation isn't enough for them.

Why champion a piece of legislation that won't make a damned bit of difference and will ensure heartache?

Besides, Giffords is on videotape about our "No [swastika] socialism!" swastika signs and our "incitment to riot."
It's embarrassing. The distancing has begun.

I venture that I and most of the guys I shoot with can change handgun MAGAZINES much faster than Paul can pull a lint-covered Tums out of his pocket and pop it into his mouth.

I guess their "point" is that untrained active shooters like the guy that shot up the rally in Arizana would be less lethal if they only had 10 + 1 shots before they had to fumble a reload.

Unless one of those rounds hits YOU in the vitals, of course...

The mentioned Rep. Tim Bishop (D-NY), lost by a razor thin margin. He knows that next time around, he is gone, so he is going for broke. This can't be good.