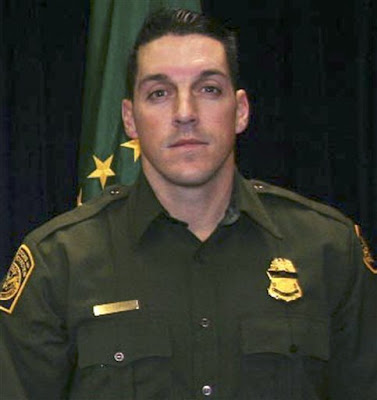 The nation's top border and customs official promised Friday to "restore the rule of law" to the U.S.-Mexico border and prosecute those responsible for the slaying of Border Patrol Agent Brian Terry in southern Arizona.

"We will bring the murderers to justice, and we will support the federal law enforcement authorities and the United States attorney to see that justice is done in this case," Alan Bersin, commissioner of Customs and Border Protection, declared at a memorial service for the agent at a Tucson sports stadium. No homicide charges have been brought against the four men arrested in Terry's slaying, and a fifth suspect remains at large.

"We will finish the job that Brian participated in," Bersin said. "We are determined to restore the rule of law to the United States-Mexico border."

Bersin's pledge contrasted with statements by Homeland Security Secretary Janet Napolitano just after Terry's death Dec. 14 that the U.S. frontier is largely secure — a declaration that has elicited anger and ridicule in much of Arizona, where Napolitano served as governor.

When I worked the Mexican border with the Minutemen in the Hachita, NM sector in October 2005, I got to meet more than a few Border Patrol agents. They were uniformly good, even brave, men trying to do a dangerous task unsupported by an administration that didn't want them to effectively do their jobs. My prayers continue to be with the Terry family as they suffer through this agony. But . . .

The spectacle of Alan Bersin promising "to restore the rule of law to the United States-Mexico border" is just too cynically hypocritical by half. ICE's own on-going investigation of the weapon that killed Brian Terry demonstrated that it was one of the ATF "walked" rifles. Bersin knows this. By now he knows all about Project Gunwalker. If he truly wants to restore the "rule of law," he should start with the SAC and ASAC of the Phoenix ATF office, and their bosses in DC who, despite red flags raised by ATF street agents, smuggled the gun that killed a brave man in his country's service. But that would take far more moral courage than pious platitudes at a dead man's memorial service.

Mike-OT but watch your back.

Mike said:
..."and their bosses in DC who, despite red flags raised by ATF street agents, smuggled the gun that killed a brave man in his country's service."

Mike, while I agree with the overall sentiment you may want to reconsider the phrase "gun that killed" we all know that the firearm as a properly functioning inanimate object is not to blame here.

Keep up the good work,

GPS. A military system we civilians are allowed to use -- just like the interstate highway system.

I'm very interested to see if any of the Powers issue a peep about ATF malfeasance, or if they continue the Reichstag Fire rhetoric about how freedom is too dangerous.
House majority leader Eric Cantor has had two emails from me alone.

Alan Bersin's own feeble attempt to deflect the blame away from where it truly lies. And since he knows the "whole story" it is really treasonous to open his mouth in this regard. Here's hoping his is one of hte many heads that will roll when the truth is out.

I couldn't navigate whitehouse.gov to find it, but CeaseFire is listed as an inspiration. Permanent semi-auto ban.

Defender: Google is our friend...