The Biggest Brother Is Gone

Don't waste time attempting to define leadership. No need to go to the dictionary. The Infantry School at Fort Benning, Georgia, had defined leadership in just two words via its motto: "Follow me!" Never ask your team to do something you wouldn't do yourself. . . You cannot make sound decisions unless you are at the point of attack. Leaders should always position themselves where the critical decisions must be made. Precisely where that location should be is a judgment call, but in my experience leaders should be as far forward as possible. Successful leaders must be highly visible, if for no other reason than to share the hardships of their men. -- MAJ Dick Winters, Beyond Band of Brothers: The War Memoirs of Major Dick Winters, p. 288. 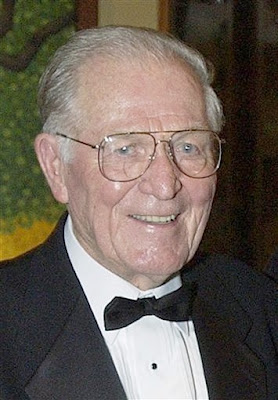 It is with great sadness that we are only now learning of the death on 2 January of Maj. Richard "Dick" Winters, Easy Company, 506th Parachute Infantry Regiment, 101st Airborne Division. MAJ Winters was 92 and had suffered from Parkinson's Disease for some time. 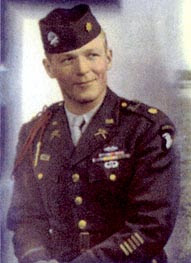 Major Winters was a fine person and a good leader.

Some years back, when Steven Ambrose was writing a book, one of his interviewees told Ambrose that he would follow Winters to hell. That statement, was given after close to fifty years on the part of that guy, to reflect on Winters. It says something about Major Winters and his ability to push a string. (Can't push a string, a person has to pull it.)

Good folks everywhere grieve the death of Major Winters. People like him were ordinary folks who came out of nowhere to meet big challenges. Winters, and our fathers and grandfathers, met the challenges.

It is too bad that those folks dropped the ball as the other enemy came closer. The Greatest Generation handed off the ball when the Commies crumbled 21 years ago. Us... we mainly have not picked up the ball and done much to make our fathers or GFers proud.

Some would say that the WW2 generation has lived and died for... nothing, these days. Witness their behavior, and ours in contrast.

"He was a good man, a very good man," Guarnere said. "I would follow him to hell and back. So would the men from E Company."

So Say We All.

Would have been an honor to shake his hand.

We were blessed to have had men like him provide for us.

"After returning home, Winters married his wife, Ethel, in May 1948, and trained infantry and Army Ranger units at Fort Dix in New Jersey during the Korean War. He started a company selling livestock feed to farmers, and he and his family eventually settled in a farmhouse in Hershey, where he later retired."

"When people asked whether he was a hero, he echoed the words of his World War II buddy Mike Ranney: "No, but I served in a company of heroes.""

A humble man and leader. Those still living, that knew him then or after, are so obviously blessed with that association. He didn't stop being a great man after moving on to civilian life. The jobs changed, but the man remained.

Good men. We need good men to help keep things on track. We lost one, but there are others. Pray they continue to be true to the service given them.

....and do your damned BEST to be like them.

Men like Major Winters are heroes to every generation of American. We should never forget what leadership and valor are all about. Godspeed Sir.

My father was a Fallschirmjaeger who had the bad fortune to be attacked by Easy Company at Carentan. I think one of the reasons he got away with his life was that he was a medic responsible for getting the wounded to the rear hospital area. 2 months later he was taken prisoner at Le Mans. Tip of the hat to Easy Co. for not shooting him.