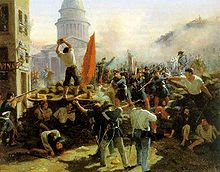 Barricade on the Rue Soufflot by Horace Vernet, 1848.

The European Revolutions of 1848, known in some countries as the Spring of Nations, Springtime of the Peoples[3] or the Year of Revolution, were a series of political upheavals throughout Europe. Described by some historians as a revolutionary wave, the period of unrest began in France and then, further propelled by the French Revolution of 1848, soon spread to the rest of Europe.

First Tunisia, now Egypt, Jordan, and Yemen. It is beginning to look a lot like 1848 in the Arab world. Not all outcomes may be for the best, however. Egypt: Three Possible Outcomes.
Posted by Dutchman6 at 7:13 AM

A little revolution from time to time is said to be a good thing... even if it makes the muslims more radical... the enemy of freedom will always be the enemy of freedom, be it christian, muslim, or hindu... We must steady our shot on the heart of tyranny in any form. Let the middle east revolt. there are hopes that a republic can be born from the ashes (enough of this 'Democracy' B.S. - we want REPUBLICS!)

The "Forty-eighters" as those socialist revolutionaries were called left Europe under threat of arrest and lengthy prison terms, many of whom fled to America. They ardently supported Lincoln's War Against Southern Freedom, as did Karl Marx, hundreds joined the Union Army and were among the most brutal in their conquest of the Confederate States of America.

The progressive/fascist government in the District of Columbia has been meddling in the middle east for over 80 years, it'd be a surprise, to many of us at least, for them to adopt an attitude of friendship towards that government now.

As for how this affects Israel, who cares?

"This will be the biggest disaster for the region and the West since the Iranian revolution 30 years ago. And in some ways it will be worse."

If the Muslim Brotherhood should bring down the Egyptian government, it will embolden the radicals in Turkey, as well. If Turkey falls, Iraq will have enemies to the north (Turkey), east (Iran), and west (Syria).

The patchworks alliance that holds Iraq together will likely fracture from the strain, and the billions in treasure that were pored into Iraq will have to be written off as a complete loss.

Lebanon will become a Syrian client state. Israel's continued existence will be called into question.

Hosni Mubarak may be a bastard, but he is *our* bastard. We can ill afford to lose him.

Foreigners urged to to get out of Egypt, Sunday Jan 30.
And the Left says Rush Limbaugh is xenophobic for making mock Chinese words when he complained that President Hu wasn't being translated on TV. Few of us speak Mandarin or Cantonese. "All you heard was ching chong ching."
Maybe Hu was saying 'We will bury you, and you'll be paying the gravedigger"?

Pro-Arab Pro-Muslim al Jazeera news ordered to close Egypt offices.
What?
Maybe they're worried about supreme Muslim Brotherhood nastiness being seen in real time by the world. It won't look like a people's revolutoin any more.

Pat H., I will always care how this effects Israel, and it is well known on the internet how much you seethe with hatred of the Jew. You, like your Nazi brothers, are going to get just what you're looking for. I really don't care what you believe in, but you are on a side that is not going to win. I pity you.

Monkey Moon calls for overthrowing capitalism to save the planet.