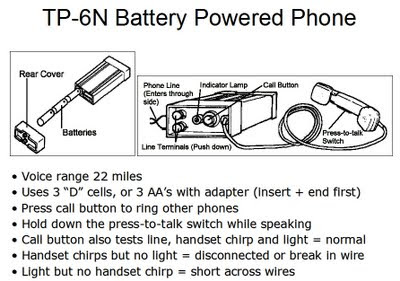 The TP-6N is a Norwegian-built felttelefon (field telephone) produced for the Norwegian and Dutch armed forces. The Dutch designation for this is veldtelefoon TA4881. It was designed in the early 1970's by Elektrisk Bureau in Billingstad, Norway, and won an Award for Design Excellence in 1973. It earned the nickname "cricket phone" presumably because of the tone generated by the electronic ringer.
In 2008, a surplus store in the US acquired a limited quantity of TP-6N phones and resold them to the public. We obtained some to evaluate, with the intention of interfacing with and/or replacing older field phones already being used for search and rescue communication. These TP-6N phones have since proved very useful, particularly in harsh cave environments. Additional phones have now been acquired from Europe, and this page is provided as an informational source for owners, users and other interested persons.

A new comment below from Ken on a post from June about field telephones. I post it here at the top so it won't get overlooked. Also, for those of you who are unfamiliar with the Norwegian TP6N field telephones, be sure and go to the link cited above.

This is for DR.D

You stated, "I've been contemplating designing a simple switch board that could be assembled from commercial parts. It's wouldn't be as rugged as a SB22 but it would be a lot smaller and lighter.

If any one needs help with field phones and switch boards and repairs/parts for the same let me know."

We are a Search and Rescue group in Minnesota that uses the TA-312 and TP-6N phones for cave operations. I recently received a SB-22 but have been talking with a fellow communications persion with the National Cave Rescue Commission on the need for as you said a smaller, simpler unit.

I would enjoy discussing the idea with you if you have time.

Obituary of excellent naval guy: at age 22 in role of Beach Commander he ordered Montgomery to "Clear the Beach" Mony obeyed!

Anyone know where I can pick up a couple of these field telephones?

I just had my field phones tuned up by:

Steve Hilsz will answer the phone personally and is both very knowledgeable and easy to do business with. He is also very reasonable and fast.

If you need parts his web site has good used and new parts that are very reasonable.