"Long live the fighters!" The Lesson of the Fremen applied to the GOP. 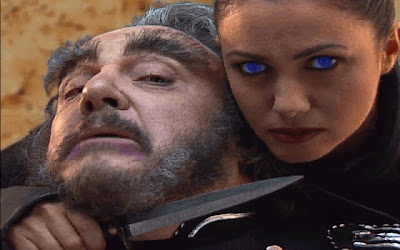 "I'm from the Tea Party,you GOP slug, and I'm here to help you concentrate on the issue at hand."

Traveling in a rental car with satellite radio was a new experience for me. I listened to Big Band music much of the time on XM-4. (Got to hear my favorite Benny Goodman riff of Sing, Sing, Sing,done at Carnegie Hall in 1938.)

I would alternate bewteen XM-4 and the various radio talk channels and the hot air folks were all agog at the "damage" the Tea Party movement candidates were allegedly doing to the GOP.

I tried calling into a couple of them with my cell phone, but I often went from tower to black hole, so even though I was on hold twice, I never got in to make my two points which were these:

A. To those who think that Tea Party candidates are "weak," "easily discredited," "wingnuts," and "unelectable," I would remind them that in 1980 Jimmy Carter WANTED to run against Ronald Reagan, believing HIM to be "unelectable."

B. The lesson of the Fremen, the spice and the Empire from Dune quoted above is absolutely true. The GOP is squealing so loud at this point precisely because they understand this. Even if their candidates lose the general elections, they will have at least removed the professional politicians of the GOP establishment from the board, and it is the GOP and its epochal failures which actually spawned the Tea Party. The Democrats are howling as well because they perceive their food trough is also about to be upended.

And, although I would not have said it on the radio, to the opponents of the Founders' Republic whose appetites compel them to try to take more and more of our property and our liberty -- even our lives if we get in their way -- I would also echo the warning of Paul Muad'Dib: "He who can destroy a thing, controls a thing."

Whatever rapacious tyrannical collectivist slugs value can also be destroyed.

At this point, anyone else besides who's there.

Another favorite quote from "Dune": "Fear is the mind-killer."
Third-party candidates may not be perfect, being human. The smear campaigns are gearing up with stories of youthful mistakes. But if voters do what they've always done, they'll get what they've always gotten.

Nice looking blade. Is that dmascus?

Love the blog, Mike.
Minor nit: This is a studio recording. The Carnegie Hall version was 12:08, available on a 2 cd set.

While I agree with your intentions here, remember that Paul Atreides used the Fremen to claim the imperial crown for himself; he did not destroy the empire and create something more just in its place. He and his Fremen then proclaimed a jihad that desolated hundreds of worlds and killed billions of people.

It's fun to watch the commentary from the talking heads.

The smart ones have realized that the GOP can no longer take its base for granted -- and that the base will push alternative candidates if the GOP doesn't pull its pants up.

The dumb ones are crowing about how the GOP is 'spinning apart', or how O'Donnell dabbled in witchcraft 20 years ago (as if that makes a difference).

Of course, the irony is that a Wiccan might just be preferable to the leftist lunacy so prevalent in Washington. Remember, one of the core beliefs of the Wiccan is 'An it harm none, do as ye will'.

Ah yes, the Harkonen and Sadoocah. Threatened by tea leaves!

To repeat great and truthful comments: "Every man dies but not every man, truly lives". "We'll make spears" "Twice as long as a man".

What those TEA party candidates need to do is foster state and local candidates. It is imperative we get beyond pinning hopes of national reform on easily bought and paid for national offices and concentrate where not only the enemy is weak but also where much of the tyranny is ladled out-at the local level.

Besides we need grass roots support. Winning Freedom politically, economically, and socially at the local level is a sure way of ensuring there's a friendly school of fish for the proverbial guerrilla to swim in.