All tyrants are brothers under the skin. More left-collectivist confusion at the Huffington Post 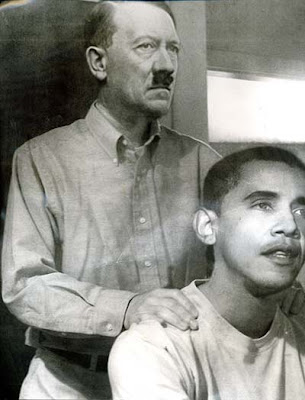 Tyranny is all about appetite and the means to satisfy it -- every tyrant tells the same lies and uses the same tools and almost all (like Hitler and Obama) are the products of crippled childhoods. Thus, tyrants are all related, no matter from what time, place or race they originate. Under the skin, it is all appetite. -- Mike Vanderboegh.

As logic goes, this isn't exactly a stellar example of clear thinking. The author can't seem to decide if the participants despise Obama as a Hitler wannabe or are racial collectivist Nazis themselves (in which case they wouldn't be comparing the Mighty Kenyan with the Austrian homosexual prostitute).

The only real disappointment I had with the article is that it denounced Glenn Beck and the Oath Keepers and not the Three Percenters.

"...a rapid-fire variant of lower part of the AR-15 semi-automatic assault rifle..."

Someone wanna tell me where I can get ME one-a 'dem rapid-fire variant semiauto assault rifle lowers?

The hypocrisy of the left never ceases to amaze me. The author at the Huffington Post never said a word about hatred when President Bush was portrayed as Hitler.

Ditto to what D.D. said.

When Obama's hagiography was being written by boot-licking sycophants, Will Bunch was silent.

Now that Obama has been transformed into the likeness of a devil, Will Bunch has found his voice. "It must be his black skin," sez he.

If the media had not been so uncritically worshipful of the Chosen One, it would be much easier for them to recognize and admit his shortcomings as a President and for Obama to abandon his failed policies.

Instead, they will circle the wagons and blame trigger-happy racists for the President's fall from favor.

The picture is proof, indeed, that Hitler loved his dog.

*Sighs*
At what point does anything this bunch writes have any bearing or relationship to reality. Its just a bunch clinging as despairingly to a failed socialist ideology as the South clung to the ideology of slavery in 1860 with perhaps similar results. The bell is tolling and it makes them even more rabid in their faulty logic.

The Bunch article isn't clear thinking because it is a backlash against real America and Americans asserting our legitimate authority.

The fear mentioned in the article is that of the author and no one else. He sees the illegitimate power of the progressive era coming to an end.