This just in: Eric Holder is in Florida to watch the last space shuttle launch, or help Tampa shred its documents, or initiate Project Moonwalker. 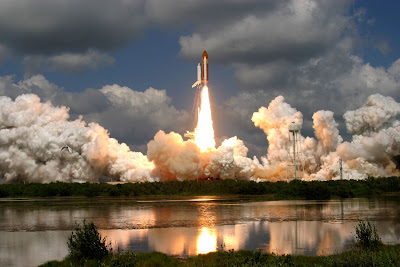 Launch of the last space shuttle. Was Eric Holder aboard?

My spies (actually, Waldo's cousin Frodo) tell me that Eric Holder is in Florida this morning, ostensibly to watch the last space shuttle launch. This has occasioned much mirth among ATF street agents and Gunwalker Scandal aficionados.

Agreeing, another offered, "Maybe he's there to help O'Brien run the shredders. There's not too many people they can trust with that job."

Yet another disagreed. "No, he's going to hop the shuttle and hide out at the space station along with three suitcases of Gunwalker documents. Obama has promised him a pardon if he'll just hang out up there until after his re-election."

When told of this on his radio show this morning, David Codrea immediately dubbed it "Project Moonwalker."
Posted by Dutchman6 at 10:03 AM

"Project Moonwalker" - that'll be a real Thriller, won't it?!

Next up - little boys at Neverland?

Last week, our administration launched a major new effort to break the backs of the cartels. My department is committing 100 new ATF personnel to the Southwest border in the next 100 days to supplement our ongoing Project Gunrunner, DEA is adding 16 new positions on the border, as well as mobile enforcement teams, and the FBI is creating a new intelligence group focusing on kidnapping and extortion. DHS is making similar commitments, as Secretary Napolitano will detail.

Not sure if you're aware of this. Holder bragging about Gunrunner in Mexico, back in April 2009.

Mike, You and David have it all wrong. Holder packed up all the Fast and Furious documents to be moved to their DOJ's new ..uh.. "secure document storage facility" at Tranquility Base on the moon. He's even sending SACs O'Brien and Newell along to make sure they get there safely.