On the midnight dangers of Thai food and eating healthy.

So, my gracious host who is putting me up in the vicinity of Mordor-on-the-Potomac until the hearing next week took me out for some Thai last night -- first time for that in a while for me. Delicious it was, to be sure, but I spent most of my dream sleep setting up a clandestine arms production facility in the countryside well away from Imperial Japanese invaders armed with bolt-action Arisakas and Zeroes -- not the most likely of scenarios, especially since an anachronistic CNC machine was giving me fits.

Worse, my host is the healthiest-eating fellow I have ever camped with and trying to regulate my sugar when I am used to dosages fit for more carbohydrate ingestion in a day than he has in his entire larder is a challenge. Thus, I go from soaring to crashing until I imbibe more sugars from disgustingly healthy fresh fruit, which sends me soaring again. Unless I figure this stuff out, all this healthy eating is going to kill me.

But, things could be worse. I could be trying to set up an arms manufacturing facility to oppose the Imperial Japanese invaders WITHOUT a CNC machine. 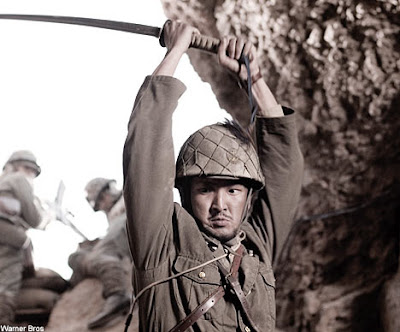 "No more Thai food for you, Yankee barbarian long-nose!"
Posted by Dutchman6 at 5:25 AM

hang in there trooper Mike; We know you can master this healthy eating too.
VETTOM III

probably the funniest thing I have heard all week. Thanks for the laugh and stay safe.

Mike, listen:
I don't know you and you don't know me, but let me say that I value your voice in the glare of oppression. You are a true leader in this movement and we need you around for a LONG time to come.
With that said, and PLEASE do not take offense at this as it is meant in the most kind way, I have seen your picture. You are a "big guy" and those of us with big bellies are at a WAY higher rate of a chance of massive heart failure. You simply MUST eat that "health food" as you call it, and get rid of the sugars and high carb foods that are so tasty! I struggle myself. I know. It ain't easy. But it MUST get done.
Good luck, and THANK YOU!