File this under, "Duh!" DOJ plays shell games with names. Too cute by half. 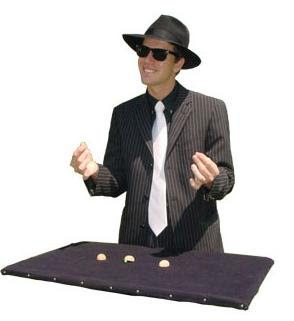 "Hurrry! Hurrry! Hurrry! Step right up, citizens, and play the new DOJ-ger game of Hide the Scandal Under the Moniker! You THINK Fast and Furious is under this shell? Wrong citizen! Try again. Three guesses for a buck! Who'll try their luck?!?"

Meanwhile, Grassley had been trying to link the Fast and Furious guns to the murder of ICE agent Jamie Zapata earlier this year in Mexico.

But a source tells ticklethewire.com that authorities found no link to Fast and Furious in that matter.

Well, of course not. Or as my daughters would say, "Duh, Dad!" Those weapons came from Dallas and a different sub-operation under Gunrunner, not the Phoenix op, Fast and Furious.

And these lying SOBs think they're being cute.
Posted by Dutchman6 at 2:03 AM

And it is "Law Enforcement" that continues to enable them to do so.

"Where the truth lies matters not" sez the watcher as he sweeps all the shells off the table and exposes the secrets to the world.