OK, so I was wrong but I'm still right. -- "Dezinformatisiya" Games. 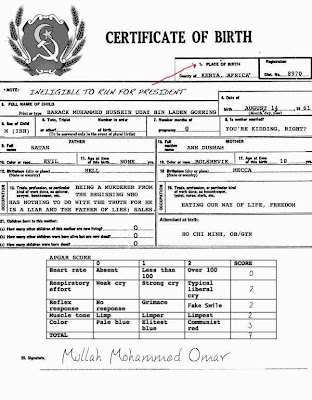 Yeah, I know, in the largest sense it is NOT funny.

And yes, I admit I missed the issue date on the Kenyan certificate which is at issue now. However, it turns out that although I was wrong about that, I was right about the "Republic of Kenya."

I stand by my analysis, and my warning.

I like you revised version of his birth certificate better.
THAT's the kind of "transparency" we need!
Jim
III

Keep the good work Mike, the Truth is NOT served by lies, no matter how well intentioned.

Here's another one I came across:

As I'm sure you might agree, you know all those laws about not selling guns to people with severe mental illness? I think maybe the same thing should apply to photoshop.