"Staring Down the ATF": Kevin Wilmeth says some kind words about me. 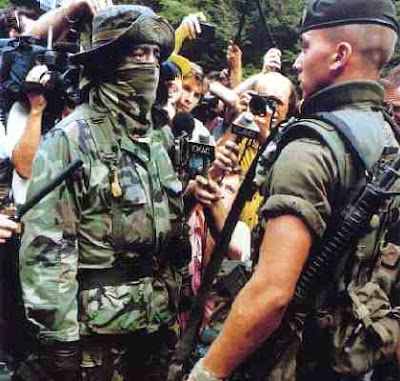 Stare down, Canadian style. Mohawk warrior stares down a Canadian soldier during the Oka Crisis.

Kevin Wilmeth, columnist who writes the Anchorage Libertarian Examiner, has some nice things to say about me. Don't believe him. ;-)

Here's a snippet. Go to the Examiner to read the rest.

Do you know about Mike Vanderboegh?

He is no stranger to controversy. He seems to have a penchant for making people squirm. Not because he says things that are wrong, mind you...in some cases, he makes even people who "agree with him" very uncomfortable, because he just might be right. 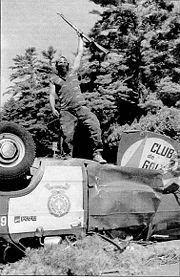 Oka Crisis, 1990. Mohawk warrior Richard Nicholas stands atop an overturned Sûreté du Québec car as part of the barricade. Photograph by Tom Hanson, Canadian Press.
Posted by Dutchman6 at 9:35 AM

Darned good article!!!!
In fact, the only way it could have been even a little better would have been with a pic of Mrs. Palin attached ;o)

That's exactly why I read Sipsey St. In the same way, Limbaugh once made me uncomfortable. But once I thought through what he was saying, I knew he was right. I'm repeating that process currently with Vanderboegh.

Having reread the article a few Universal Fed Discouragers see Improvised Munitions Inc. in the Absolved chapter links may have been helpful to our Mohawk counterparts. Just by their possible existence.

I'm in the NE corner.