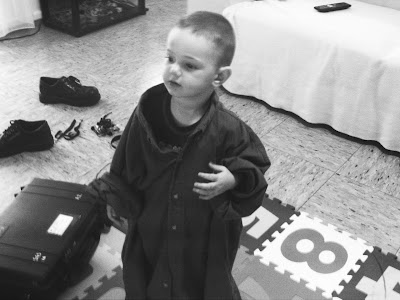 My daughter-in-law Nicole in Germany sends me this picture of my grandson Gabriel with this comment:

Since Matthew put on the shirt on Gabriel this morning he did not want to take it off. It is hard on all of us that Matthew has to work long hours but we manage. Gabriel is crying for the Papa though when Matthew is leaving for work in the morning.

I hope this will reach you in good health

Nicole, Matt's second (and, I daresay, last) wife is a real keeper. The boy got lucky when he met her. He loves her very much. She is a beautiful German girl, half French Huguenot (Gabe has red hair and a temper to boot.) A red-haired Vanderboegh. Who'd a thunk it? The temper, yes, but red hair? The world does turn.

This reminds me of a photo I've been meaning to have scanned of Matthew when he was a couple years older than Gabe is right now. He is sitting on a rocking horse, facing the camera, dressed in a camo shirt and Vietnam-era boonie hat holding an almost-full size rubber AK-47 -- a US Army training aid I bought off of a Special Forces sergeant. He looks like a diminutive modern cavalryman. 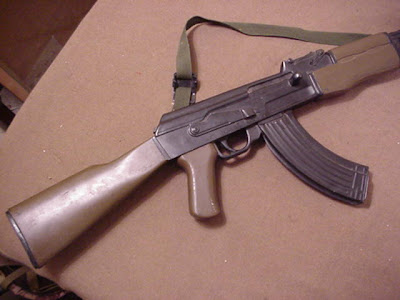 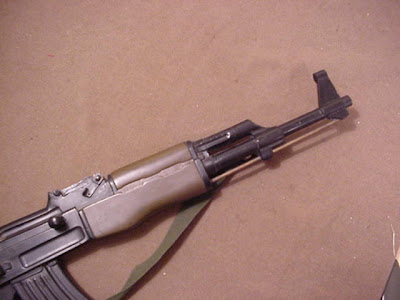 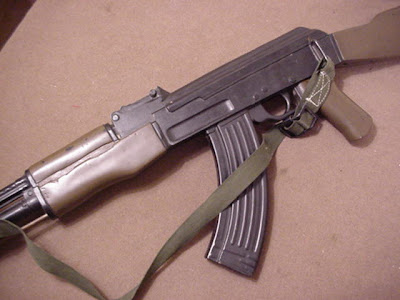 He was popular with the neighborhood kids because when he played war in the back yard, he had helmet liners, all kinds of toy firearms and a full-size mock-up of a 57mm anti-tank gun. I wish I had a picture of it. The trails were two-by-fours, the barrel was a long piece of PVC pipe with a muzzle brake crafted on the end of it. The shield was one inch plywood, with some sort of salvaged machine tool box with hand cranks for elevation and traverse. The wheels were large trailer tires. It even had a working breech block made out of a metal box so you could load dummy rounds in it. Painted all over in olive drab, it was an instant hit with the neighbor kids.

Oh, yeah, I also made him a 1919A4 on a tripod, with dummy belts of 30-06 and a top cover that worked so you could "load" it, and placed it in a sand-bagged revetment, scaled for five year olds.

Also in the revetment was a functioning 60mm mortar made out of 2" steel pipe and large threaded rod for a bipod and angled steel plate for a base plate. The tube had a hitch ball screwed into the end of it, and I improvised a cup to hold the tube onto the base plate. It looked so good, painted OD, that from a short distance you couldn't tell the difference between it and a real M19. (I later used it in the 90s for teaching classes to the militia on tactical deception.)

Every Fourth of July, with me as gunner, we would launch almost-empty grout tubes with improvised flash powder charges. Light the fuse, toss in the charge, drop the grout tube down the pipe and "WHOOM" . . . off it would go, usually to come to rest in a neighbor's gutter, sometimes on the next street over.

Did I mention we weren't popular with the adult neighbors?

Those were the days.

A "liberal" would say I programmed him to be a "baby-killer."

Who gives a crap?

To the end of time.

This warms my heart. Great looking kid, great name.
And all the old toys you mentioned! Wow! We had to make do with carbide cannon and plastic helmet liners.

Stumbled across it. Go browse a while!

The acursed left got one thing right however: Start with the young.

Nothing pleases me more than to see a child raised with guns.

Mike,
And your son. How many ACTUAL (not imaginary, not possibly) babies has he killed?
None? Thought so.
Once again, proves the SocDemLibLefts wrong, doesn't it? As Ann Coulter has often said, if you want to win an argument with a liberal, quote facts. Leaves 'em speechless.
Fine Opa, fine family.

You needed a better class of neighbors. Your launching of things would have only offended me if you refused to let me join the fun.

You're also goading me into showing off again :)

A "liberal" would say I programmed him to be a "baby-killer."
Oh hypocrisy thy name is liberal.