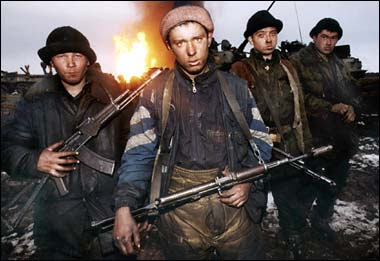 My thanks to Pete at WRSA for reminding me of this old post.

People would be thinking and training seriously re the following (thanks to Vermontagnard):

- Changing magazines with left arm out of commission.

- Shooting off left shoulder, right arm out of commission.

- Shoot a goat and learn to keep it alive. Have an 18Delta run you and your boys in this. Best med school for trauma.

- Sidearm draw with no sites, shooting 3 IDPA targets at 5 meters in 2 seconds

- Learn how to kill with a knife.

- Learn how to kill with a garrote.

- Learn how to kill with a can of carb cleaner.

- Disable a car with homemade EMP.

- Shoot from inside a car with your hunting rifle without breaking concealment.

- Shoot across your buddy.

- Shoot between your two best friends, 50 meters, iron sites, 2 meter gap. Have your friends stand facing you, and shoot the target right between them. Just do it. Rotate personnel. Trust is the key, competence a must. If your bro is in a sea of bad guys, out of ammo and going at it hand to hand, and you're 100 yards from the game, you'd better be able to make those shots.

- Shoot a 3 man stack, laying one on top of the other, around a corner, engaging 3 targets each in under 3 seconds.

- Practice most of your shots off kneeling -80% of them. In a fight, you can move from this and drop to this faster than any other supported.

- Shoot inside an abandoned building. Turn that into an op all by itself with lookouts, comms, and a complete ORBAT briefed on it.

- Lay in a pipe/culvert UNDER a road and learn to ID vehicles by sound and vibration (let every man do this with an ear piece so a tracker can call in the vehicle for instant spot analysis).

- Shoot an AQT 100% prone in tall grass, learn to time shots between grass waves in the breeze.

- Do basic PT, and try and ruck march as often as possible, mix up bike and swimming to stay fit. You need to survive your first contact with enough gas in the tank to make it to your next bash on the two-way range.

- Best all around exercise? My vote is firewood cutting, splitting, hauling, stacking. Aerobic and anaerobic, productive too.

- Learn to coordinate shots, with one controller tagging the shoot, so nobody can ID a direction for 6-10 simultaneous rounds impacting into the bad guys' cranial cavities - and each shot masks the sister shot.

It's like an old US Customs Service poster used to say:

Every day you are not training, someone else is.
Posted by Dutchman6 at 1:12 PM

I second that 'best all around exercise is wood cutting, splitting and hauling'. I do quite a bit of that and it's fun to watch folks who think they are in shape try it for a few minutes!

That homemade EMP excercise sounds interesting. Got any sources?