You can't make this stuff up. Old Bloody Hands & the anti-firearm rights fish cop from the FLEoA circus. The Adventure of the Stuffed Fish Smugglers 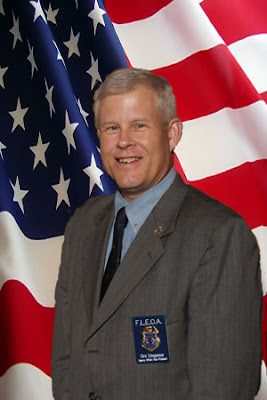 
When we last heard from the Federal Law Enforcement Officers Association here at Sipsey Street, they were condemning Obama's remarks about ICE agents in Mexico.

At the time, FLEOA proclaimed:

FLEOA intends to honor the memory of hero Special Agent Jaime Zapata by continuing to advocate for agent’s safety abroad. FLEOA extends its heartfelt prayers and condolences to Special Agent Zapata’s family, and wishes Special Agent Victor Avila a strong and rapid recovery. FLEOA will honor the ultimate sacrifice made by Special Agent Zapata during the annual Candlelight Vigil at the National Law Enforcement Officers Memorial on May 13th.

Now, the FLEoA Circus is going to honor the memory of Jaime Zapata and Brian Terry by giving political cover to the craven politicians who are desperately trying to deflect attention away from the program that killed them.

From his FLEoA bio:

Chris Schoppmeyer has been in federal law enforcement for over 28 years, first as a Wildlife Inspector and Refuge Law Enforcement Officer for the US Fish & Wildlife Service and for the past 21 years as a NOAA Fisheries Service Special Agent stationed in New Castle, NH. Chris has been a FLEOA member since 1990. From 2001 to 2007 he served as the Agency President for the NOAA Fisheries Service, Office for Law Enforcement. In 2003 Chris formed NH Chapter 67 and has served as Chapter President since then.

Chris’s entire career has been dedicated to conservation law enforcement. He holds two degrees from Unity College, Maine in Conservation Law Enforcement and Daniel Webster College in NH for Organizational Management. During his career as a fisheries agent, Chris served a 10 month assignment as a Staff Assistant to a NH congressman, focusing on environmental issues. Chris has received numerous awards including the Chevron Conservation Award in the Citizen Volunteer category. As Vice President of Agency Affairs, Chris will serve as the liaison between the Agency Presidents for over 70 agencies and the National Executive Board.

Adam Goldman, writing for the Associated Press in March 2007, gives us a sense of this hard-charging federal fish cop.

NEW YORK — The armed agents stroll into the frigid market, where the pungent stink of seafood assaults them. The smell pervades their clothes and the scaly, gooey water clings to their boots.

They pass burly men slinging slabs of fish with gleaming hooks and table saws ripping through frozen chunks of swordfish and tuna. Tempers flare as forklifts dart around the cavernous building known as the Fulton Fish Market.

Agents Chris Schoppmeyer and Scott Doyle barely notice any of this. They're only interested in clams today. They want to know which of the wholesalers have unknowingly bought the shellfish from a company involved in a smuggling operation.

They stop at a fish stand. Schoppmeyer recognizes the name. He's got a bite. "They were definitely sold here," Schoppmeyer says.

Such fishing expeditions play out on a regular basis for agents at the National Oceanic and Atmospheric Administration's little-known law enforcement office. 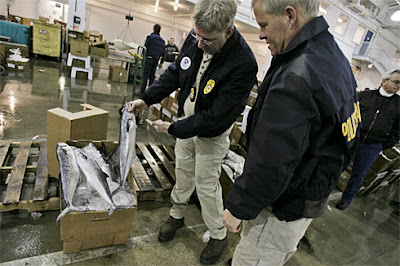 "Drop those illegal clams, back away from the crate, and put your hands on top of your head!" Chris Schoppmeyer (on right) in search of savage gangs of illegal seafood buyers.

Ooooh, a fish cop. Just the right sort of "expert" to testify about firearms laws and weapon smuggling south of the border. You know, you can't make this stuff up.

Kinda reminds me, in a low-budget sort of way, of Klaus Nordling's Lt. Drake of the U.S. Naval Intelligence and the Adventure of the Stuffed Fish Smugglers. 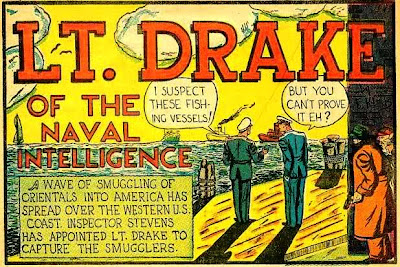 (Go here to read the whole comic strip.)
Posted by Dutchman6 at 9:42 AM

Around here they are "Clam Cops"

NOAA has a law-enforcement orifice?

Marxists will use anyone or anything to get what they want or where they want to go. The only important thing is that the person being used is willing (sometimes not), a victim, and or that they have credentials which can be used to support credibility to the uneducated or uninformed. Dr.Soandso, Agent Whosywhatsit, Pastor Plutocrat, etc.

Whereas, they assassinate the motives and characters of any credentialed person, who stands against them. This is also why they kill all of these people, who are not party members when they take power.

Kinda makes things really plain to the "experts" what side of every issue they want to come down on doesn't it?

This is exactly what most "our" media does every day.

i stand in utter amazement

"NOAA has a law-enforcement orifice?

The green police. Audi made a commercial fantasizing about how much power they'd like to have.

Wow! It just struck me the comic strip is anti-gun. To wit:

a. Only the criminals had pistols and used them.

b. Lt. Drake only used his fists (no firearm) defend himself.

c. Lt. Drake used a pistol to overpower the unarmed (and possibly groggy from their recent slumbering state) aliens.

d. Lt. Drake shoots the hatch without fear of ricochet.