"Command deck panic" at the Hoover Bldg as FBI fears someone will figure out their Gunwalker crimes. 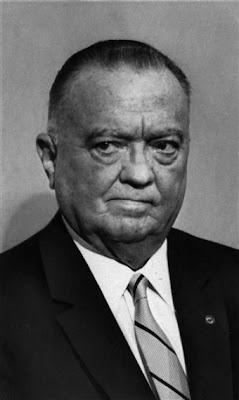 Coming soon to the nightmares of Robert Mueller. The ghost of J. Edgar Hoover, they say, is "some kinda pissed."

The William LaJ. FOX piece on the FBI's perversion of the NICS checks to facilitate the Gunwalker plot "went off like a bomb" in the Hoover building, according to my sources. "Command deck panic," said one, with institutional mid-levels looking at Mueller and Company askance and asking "What would J. Edgar do?" The source answered that question: "Boy, I'll bet J. Edgar is some kinda pissed." He added, "He didn't mind breaking the law, but he was purely allergic to getting caught at it."

So, what cabal of mid-levels will conspire to throw Mueller and Company in the Potomac and try to salvage the reputation of their "beloved Bureau" by turning on the White House?

And there just so happens to be a bunch of nice young men (mostly) down at the House Oversight and Government Reform Committee who would be happy to help them out.
Posted by Dutchman6 at 4:59 AM

Should be a straight line to the White house because you can't believe at this point, these actions weren't sanctioned.

Sanctioned by the White House, DoS, DHS, FBI, etc. It wouldnt be a stretch to imagine the CIA"s involvement somewhere.

DoS (especially HRC) will happily roll on alcon to keep anyone from Foggy Bottom from being thrown into the volcano.

Now that three of the top ATF Supervisors in the Gunrunner-Gunwalker Operation have just been promoted amidst the hearings, it looks to some of us as a bid for their silenced testimony.

This is what Hoover did do Monroe