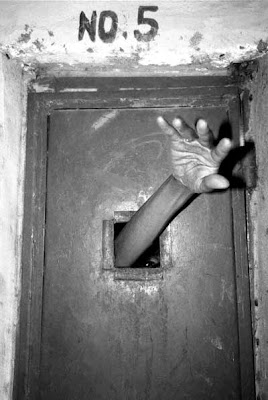 In the Soviet Union, psychiatry was used for punitive purposes. Psychiatric hospitals were used by the authorities as prisons in order to isolate hundreds or thousands of political prisoners from the rest of society, discredit their ideas, and break them physically and mentally; as such they are considered a form of torture. This method was also employed against religious prisoners, including especially well-educated atheists who converted to a religion; in such cases their religious faith was determined to be a form of mental illness that needed to be cured.

Psikhushka (Russian: психушка) is a Russian colloquialism for psychiatric hospital. It has been occasionally used in English since the dissident movement in the Soviet Union became known in the West. -- Wikipedia, Punitive psychiatry in the Soviet Union.

Coming soon to a gulag near you: "Oppositional defiant disorder."

Well, people have always said I was "ODD." I just didn't know what they meant until now. ;-)

(A tip of the boonie hat to Mike McNulty for forwarding the above link.)

Elderly people from the Old Country are guoted now and then as saying they've seen all this before. Yes, indeed.
But those countries were not America.
When they come for me -- or my neighbor -- it won't be a quiet stroll to the cattle cars.

Of course you're odd! You're certifiable! Anybody who believes this:

We hold these truths to be self-evident, that all men are created equal, that they are endowed by their Creator with certain unalienable Rights, that among these are Life, Liberty and the pursuit of Happiness. — That to secure these rights, Governments are instituted among Men, deriving their just powers from the consent of the governed, — That whenever any Form of Government becomes destructive of these ends, it is the Right of the People to alter or to abolish it, and to institute new Government, laying its foundation on such principles and organizing its powers in such form, as to them shall seem most likely to effect their Safety and Happiness.

just has to be crazier than an outhouse rat!chaster

The most important part of the diagnosis is the opinion of the head-shrinker that the behavior is more pronounced than in a "normal" individual.

It's all about where the threshold is set. I'm sure a drug-prescribing Psychiatrist could be found to diagnose at any requested level, assuming that his qualification for Federal funding is promised to continue.

That ain't news. They've been working on the psychiatric industry for years now. You can't tell me the upswing in ADD/ADHD diagnoses is an accident.

To be fair, though, I've yet to encounter a psychiatrist so thoroughly dishonest as to try diagnosing me with that 'disorder'.

Folks, ODD is real and it is not something that is applied to adults. I have downloaded the diagnostic manual and the definition of ODD has nothing in it about "free thinkers". It is a label ONLY applied to minors.

That being said, there is nothing to stop the head shrinkers from ADDING a "disorder" or "syndrome" or some such that WOULD be the adult equivalent of ODD. I would not put it past them. Of course if they DID, that could open the door to an insanity defense based upon Adult Oppositional and Defiant Disorder. Might be interesting.

I don't expect the republic to last long enough for that to come about. Hell! I expect the Democrats to have a net INCREASE in seats this coming Tuesday. I believe that the crap showing up in NC and Nevada are just the tip top couple of inches of a HUGE iceberg of machine vote fraud. I know I'm gonna check my results very carefully before I hit the final button.

The assertion about ODD applying to anti State types holds no water whatsoever;  if you read the 3 pages of the DSM -IV manual linked to at the website, free thinkers, antigovernment types, and constitutionalists are not mentioned.  The diagnosis is made when the person has impaired function of their social or professional life secondary to an oppositional behavior pattern that even a layperson would notice as inappropriate or over the top.

Now, if you tell me that a government employed psychiatrist conspired to keep someone locked up with this diagnosis, or a conduct disorder diagnosis, I suppose that could happen anecdotally...but this story is making the rounds in the right wing blogosphere and, I believe, keeps getting posted without someone vetting it properly. I recommend deleting the story, and getting word around to other sites that published the links to the original that someone mis-read the source. It makes us look bad, and I for one don't want that.

If they think I'm defiant today, let them cross one of the lines in the sand and see how defiant I can really be.
I promise to uphold the highest principals of my mental disorder and become a royal pain in the posterior of their UN-Constitutional kabal.