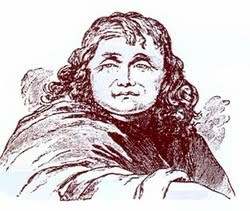 "Mad Ann" Bailey was born Anne Hennis in Liverpool, England, in 1742 and came to America at age 19, probably as an indentured servant. Her first husband, Richard Trotter, was killed at the Battle of Point Pleasant, West Virginia on 10 October 1774. Fought at the confluence of the Kanawha and Ohio Rivers, the bloody, day-long battle pitted Colonel Andrew Lewis' 1,100 Virginia militiamen against a like number of Indians lead by the Shawnee Chieftain Cornstalk. At times Cornstalk and his braves held the upper hand, but eventually the firepower of the rifles of the backwoodsmen proved superior on the heavily forested battlefield. Ultimately, 230 Indians were killed or wounded and more than 50 Virginians had lost their lives, including Anne Trotter's husband.

Considered to be "the first battle of the American Revolution," the Point Pleasant action broke the power of the Shawnee and their allies in the Ohio Valley and prevented a general Indian war on the frontier. More importantly, it prevented an alliance between the British and Indians which could very possibly have caused the Revolution to have a different outcome. This forcible peace enabled western Virginians to return across the Allegheny Mountains to aid Revolutionary forces.

Grief-stricken and hungry for vengeance, Anne left her son William with a neighbor named Mrs. Moses Mann, then joined the militia, took up "male dress," the rifle and the tomahawk, and became a frontier scout, messenger, spy, and Indian fighter. She was the subject of many adventures both true and legendary. She became known as the "White Squaw of the Kanawha", but was more widely known as "Mad Anne". Also called the "Heroine of the Kanawha Valley," she is still considered something of a patron saint in the hills and hollers of West Virginia.

She married her second husband, John Bailey, a frontiersman and ranger, about 1785 and moved with him to Clendenin's Settlement in the Great Kanawha Valley near present-day Charleston, West Virginia.

Her most famous exploit was in 1791 when Fort Lee, near Charleston, was under siege by Indians. When the fort's powder supply ran low, Anne volunteered to go for help. She escaped the fort and the besiegers, rode a hundred miles to Fort Union (present-day Lewisburg, West Virginia), and returned on the third day with powder, thereby saving the men and the fort. This incredible feat was later memorialized in the poem Anne Bailey’s Ride. She remained on duty until 1795 where the Treaty of Greenville ended the Northwest Indian War.

In 1794, John Bailey was murdered near Point Pleasant, Virginia and after that she lived with her son but still traveled and visited friends. A few years after her second husband's death, she traveled to Alabama, apparently to visit her stepson, Abram Bailey. When her son and his family left Virginia for Harrison Township, Gallia County, Ohio in 1818 she went with them. There, even in her old age, she taught school and continued to travel until her death on 22 November 1825.

Her remains were later moved to Point Pleasant, now named Tu-Endie-Wei State Park, the site of her first husband's death. 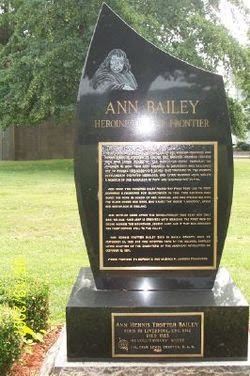 Great story and I went to military school in Lewisburg.

Mike,
Another woman of the Revolution that you may want to look up is Prudence Wright. While the men of the town were off to battle, she and a group of local women took to guarding the bridge in Pepperell MA (the last outpost before Canada in those days) and captured a courier carrying a message asking for reinforcements.

We have a unit operating in your area. see the link below. We remember Annie well here.

Face it men, women let us believe they are "the weaker sex" until we need them. God Bless the tough women of this country, who, in our time of need, dumped the skits, lipstic and rouge to kick some butt. I salute them!

Ann Bailey is one of my really great Grandmothers!