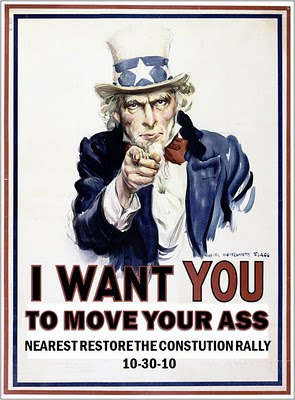 As has been pointed out by several Threepers who will be attending, we have been having trouble getting the word out through state and local media who have ignored the press releases largely because of the demands of the larger story of the election. They view us, perhaps rightly, as a campfire set up in the middle of a forest fire that is the fight for the Alabama state house and governor's mansion.

Others who know about it and would otherwise participate, including the Libertarians, are fighting the various electoral campaigns on this last "surge" weekend before Tuesday and will not be there. This has also has had an effect on the speaker's list, which at the moment is short.

One more press effort goes out this morning, but I rather think that absent heroic individual efforts, our turnout will be small (less than a hundred). That is not to say that the press won't cover it, but any publicity would be after the fact.

Rest assured, we WILL have the rally. The day will be crisp but beautiful, especially up on Chandler Mountain. We will have speeches, and even if we have no media coverage whatsoever, we'll just cut the "public" part a little short and adjourn to an improvised but private liberty workshop. Among the topics I would like to discuss is what we are going to demand of the new Alabama legislature and senate when both houses change (as seems likely) to GOP control for the first time since Reconstruction -- Vermont carry, an Alabama Firearms Freedom Act, reform and re-invigoration of the Alabama State Defense Force, etc.

And of course I will be available for any and all questions afterward. We may in fact get more accomplished with a smaller crowd than a larger one.

This will also give those of you who bring family members a chance to explore the natural wonders of Horse Pens 40 and Chandler Mountain. We will make the day worth your time and money in any case.

I apologize (in advance of knowing just how inadequate they will prove to be) for my own failures to successfully get the word out. If you can, please take today and get the word out on the 'Net out in any gun forums (ARFcom, etc.) or local political discussion venues (AL.com) you can.

This may be on private property -- because of an onerous Alabama law that should be overturned next year -- but it will be the first armed political rally in Alabama in modern memory. It will not be the last.

Thanks in advance for your efforts. I look forward to seeing y'all there.