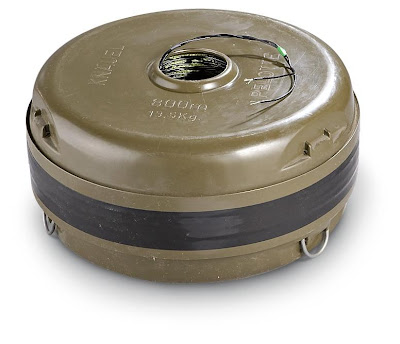 You may recall from my post earlier in the month that Sportsman's Guide had the Swiss equivalent of the US MX-306/G wire dispenser.

The Swiss dispenser, called a "wire ball" in Swiss Army parlance ("ball" is the meaning of both the words "pelotte" and "knauel" embossed on the plastic cover -- there are four national languages in Switzerland, German, French, Italian and Romansh), contains 6-strand, black plastic covered, WD-1TT equivalent phone wire, 800 meters long (approx. 874.75 yards, or one half mile). In the Swiss dispenser, however, the US canvas and tape design is replaced by a similarly shaped very sturdy 16" x 16" plastic container with D-rings for securing to a packboard or ALICE frame. The Swiss version weighs 30 pounds. The ones being offered for sale by SG are in brand new, never issued condition, manufactured in 1971 by Schweizerische Isola-Werke in Breitenbach, in the canton of Solothurn in the northern part of the country.

As I observed earlier, the best thing about the tough plastic dispenser is that it appears to be able to be reloadable from a DR-8 reel. This is a step above the U.S. system and has the advantage of being available from SG for $49.95 each ($44.97 if you get the SG discount).

You may recall that one of the ones my son ordered was back-ordered, and it was just delivered to my front porch. Therefore, if you were waiting to order some of these, they once again have them in stock. A half mile of field telephone wire for fifty bucks is a pretty good deal, especially since the Swiss put even more thought into the design of the dispenser than the US Army did the MX-306/G. Also unlike the US dispenser or steel reels, the Swiss "wire balls" require no other packaging like wooden boxes as they can be picked up by the D-Rings (which are stouter than on the MX-306/G) and they stack well, each nesting on top of the other in stable fashion. An outstanding design all around.

Now, if I could just find a Swiss Army manual on field wire and cable techniques like our FM 24-20. I know just the daughter-in-law who could translate it for me. (Grin.)

I'd also like to find some of these Swiss 1/4 mile reels, "400m Fernmeldekabel für Feldtelefon oder Pyrotechnik." Well, I can wish, can't I? 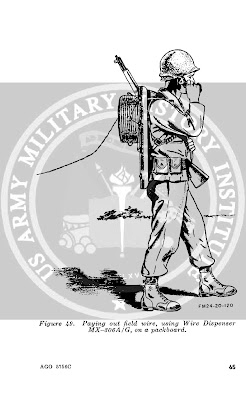 I've got the field telephones, but not the wire. That's a good deal, any way you cut it. There's a guy I know works for the telephone co. that I was going to hit up for spools of the wire he uses; but, now I won't have to, and be indebted to him.

My crew use these phones when we're at the range, and I've only got a small hunk of wire, just enough for that particular use. Now, I'll have enough for a true field application. Thanks for the info on Sportsman's Guide.

Mike - You are too good of a salesman! SG already has put them on backorder until September.