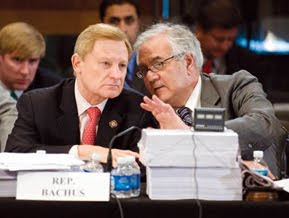 Spencer Bachus, permanent congresscritter from my district, is in trouble with the GOP. And considering their well-nigh non-existent gag reflex on principle, that's saying something. When Spencer gets reelected in November (his is a gerrymandered Republican "safe" district), he will be set for a twenty year run. It would be impossible to detail in this small space what a sell-out Spencer has been over the years. We had an opportunity to throw him out in the primary a couple months back, but the candidate the Tea Party folks decided to back was too much of a nice guy and wasn't

b. was unable to overcome the huge money advantage that every incumbent has in politics these days.

So now, we are reduced to hoping that Spencer gets his wings clipped by the GOP establishment.

Sheesh, how embarrassing.
Posted by Dutchman6 at 8:36 AM

I feel your pain. My congress-puke used to be multiterm Wayne Gilchrest. A rhino of the highest water, but supported by the MD state R establishment. Ultimately though he lost a primary to a good conservative candidate who lost to an Annapolis liberal named Frank Kratovil. Kratovil's seat is now highly endangered and odds are he'll lose it. Gilchrest was no better than Kratovil, and come this November we'll have a conservative representative! So what I'm saying is GET INVOLVED (I and 2 of my neighbors I drafted were at a Republican committee meeting last night for example) and drive your community to get rid of Baucus. Baucus does not own that seat, the people do. You have the right to fire him! Now get to it!

Caption for photo:
"Would you look at the ASS on that guy? Wonder if he'll give me his private number when this is over today?"