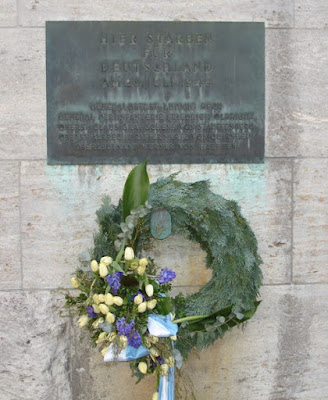 The 20 July plot of 1944 was the closest attempt to assassinate Adolf Hitler, the leader of Nazi Germany, inside his Wolf's Lair field headquarters near Rastenburg, East Prussia. The plot was the culmination of the efforts of the German Resistance to overthrow the Nazi regime. The failure of both the assassination and the military coup d'état which was planned to follow it led to the arrest of at least 7,000 people by the Gestapo. According to records of the Führer Conferences on Naval Affairs, 4,980 people were executed, resulting in the destruction of the resistance movement in Germany. -- Wikipedia.

There is a scene toward the end of the movie Valkyrie, where the principal actors of the failed plot to kill Hitler on 20 July 1944 are hustled out to be shot -- the first of almost 5,000 to be executed by the Nazis in revenge for the attempt.

In the movie, Oberleutnant Werner Karl von Haeften (9 October 1908 – 21 July 1944) Klaus von Stauffenberg's adjutant interposes his body between the firing squad and von Stauffenberg. If you had not read the history, you might think that this was Hollywood hyperbole. It was not. 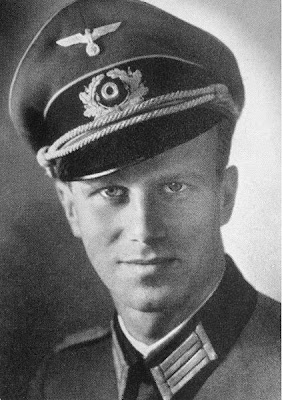 Haeften and his brother Hans were born in Berlin to Hans von Haeften, an army officer and President of the Reichsarchiv. He studied law in his hometown and then worked for a bank in Hamburg until the outbreak of World War II, when he joined the German army. In 1943, having recovered from a severe wound he had suffered on the Eastern Front, Haeften became adjutant to Oberstleutnant Claus von Stauffenberg, one of the leading figures in the German Resistance.

On 20 July 1944, Haeften accompanied Stauffenberg to the military high command of the Wehrmacht near Rastenburg, East Prussia, where the latter planted a briefcase bomb in Hitler's Wolfsschanze bunker. After the detonation, Stauffenberg and Haeften rushed to Berlin and, not knowing that Hitler had survived the explosion, engaged in a coup d'état, which would swiftly fail.

On the same day, Haeften, along with Stauffenberg and fellow conspirators General Friedrich Olbricht and Oberst Albrecht Mertz von Quirnheim, was arrested and condemned to death by General Friedrich Fromm. All four were shot after midnight by a ten-man firing squad from the Grossdeutschland Guard Battalion in the courtyard of the War Ministry, the Bendlerblock. When Stauffenberg was about to be shot, in a last dramatic gesture of defiance, Haeften threw himself into the path of the bullets.

Unfortunately, the question is, would the conspiracy have transpired, if Germany had been winning?

For anyone who hasn't read Rommel's heroic end.

Let us hope that we do not have the same fate as Germany.
Our history is rich of men who stood against tyranny, but are there enough?
Only God knows, and only he can help us.

I want to stand and applaud Female III.

We are faced with similar choices our forefathers faced. We need to make the hard decisions. No one said those decisions would be easy but they are absolutely necessary.

We aren't free today because our fathers and their fathers took the easy road.

We are free because they did the hard things and made the difficult choices and sacrificed for our futures.

We need to be ready, willing and able to do the same otherwise we are inviting our enemy to dictate to us our collective fate.

History repeats itself. Unbelievably I see the same thing happening here. Our liberties and our freedom are being stolen on a daily basis. When the time comes, and it is coming soon, the III % will rise to recover lost freedom. The federal military and the bulk of law enforcement will not stand down. They will support the regime and willingly attack the Patriots. Guaranteed.