The farce was with him.

You can't make this stuff up. Nor, I dare say, would anyone else other than the Daily Mail come up with such cheesy captions for the photos. The camo pants were a nice touch, though. Can Janet Napolitano be far behind in blaming this on "domestic terrorists"? And wouldn't a light saber have been scarier? 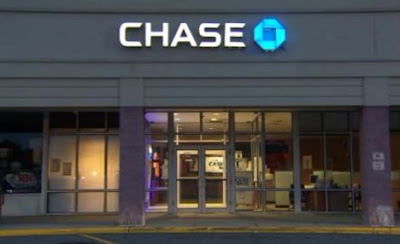 "Counting the cost: The Chase Bank in Setauket, New York, remains closed as staff count the tills to see how much the bandit made off with." 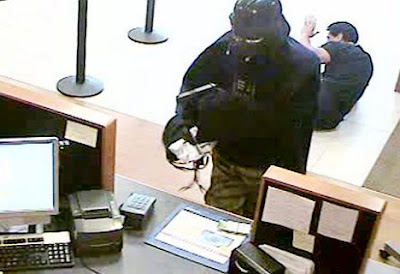 When a six-foot man strode into a Long Island bank yesterday dressed as sci-fi super villain Darth Vader, customers and staff thought it was a joke.

But they soon realised how serious the man was when he produced a handgun and demanded cash.

Police in New York are now trying to trace the phantom menace, who stuffed cash into a bag and disappeared.

The man entered the Chase Bank in East Setauket around 11:30am, wearing the distinctive Darth Vader mask, a long black cloak and - slightly out of character - camouflage combat trousers.

One customer thought the outfit was so funny that he started joking with the dark lord as he tried to pull off his heist.

Suffolk County Police Detective Sergeant William Lamb said: 'The customer thought it might have been a joke, and not a serious attempt at a robbery.'

But staff and customers were left in no doubt when the man then produced a handgun from a bag and screamed, 'This is not a joke' to cashiers.

Police have released CCTV images of the man stuffing the money into a drawstring bag featuring a New York Yankees logo.

As he left the robber punched another customer who tried to stop him.

The bank was still checking its drawers last night to figure out how large his take was, Detective Lamb said.

It was the second recent off-the-wall bank robbery. On Wednesday, the NYPD arrested a man dubbed the 'Bouquet Bandit', who acquired his unusual nickname after bringing flowers and potted plants into the banks he robbed. 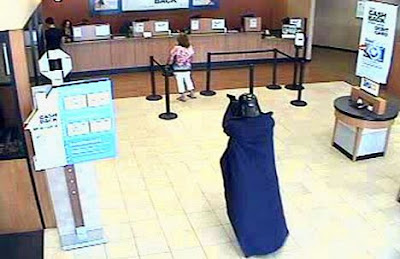 "Darth Raider: Staff and customers thought it was a practical joke when the man, dressed in distinctive Star Wars helmet and cape, first entered the bank."
Posted by Dutchman6 at 8:37 PM

Call me a bitter, clinging paranoid but if someone walked into my place of business dressed as Darth Vader my suspicion index would go up. If that place of business was a bank, It'd be reaching for the silent alarm.

Blaster-free zone.
Mask+bank usually=trouble.
Bet it's harder to repel the .44 Magnum projectile with costume gauntlets than a burst of coherent light...
Think his handgun was registered, there in New York State?

"The bank was still checking its drawers"

So were the tellers, and most of the customers.

I can't believe this HASN"T been done until now...poor Lucas must be ashamed...

A good disguise,If he could hide his voice pattern he might just get away with it. I can´t even tell what Race he is.

Smart Guy could be an ¨Only One¨or one of us financing the Restoration.

If it had been the real Darth Vader, no one would have remembered the robbery. The CCTV would have recorded it for the insurance claim.

he pulls his gun in the middle of the lobby.. wants attention and to be "noticed" by the media.

Weapon appears to be Glock and user familiar.

Striking the customer w/ his hand suggests he has a certain confidence in his physical prowess, normally a scared H/U creep would use his weapon as a striking instrument.

"Don't be so proud of this financial terror you have constructed. The ability to rob a bank is insignificant next to the power of the force."

LOL. There's some CRAZY motherfuckers out there.

I don't think this one quite qualifies, but I do like a well palnned and executed heist. One recently happened in my neck of the woods...

Not to condone it, but I have to tip my cap.

I'm sure upon completion of his heist, the criminal reflected to himself...

I'm sure upon completion of his heist, the criminal reflected to himself...

Oh, that was great!

In a state full of Statist-unarmed sheeple, expect to see this more often.
"Cowering?!!" Give-me-a-break.
Well, give half-kudos to the MAN that at least TRIED to stop the bandit.
If I weren't such an ethical citizen, I'd be thinking of something along that line myself.

I sense a great disturbance in the Force, as if a dozen bowels were suddenly loosened.

Annon. Marpat cammo is available at your local Military Surplus store, nothing that would be hard for a civilian to get a hold of. Also, a 6' man built like this guy would be pretty confident in his abilities.