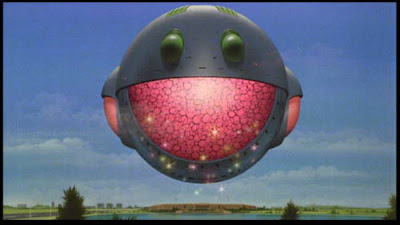 Zeks: "Look, man, if there's one thing I know, it's how to drive while I'm stoned. You know your perception is completely fucked so you just let your hands work the controls as if you were straight." -- Heavy Metal, 1981.

Of course, maybe he wouldn't share a toke with the bear. At least he gets to collect workman's comp.

Man mauled after smoking pot can get workers' comp

HELENA, Mont. -- A Montana judge says it's not a worker's fault he got mauled by a grizzly bear at a tourist attraction, even if he smoked marijuana before trying to feed the animal.

Brock Hopkins acknowledged smoking pot before arriving to work at Great Bear Adventures on Nov. 2, 2007. When he entered the bear's pen, he was attacked and had to be hospitalized.

The owner of the attraction near Glacier National Park says Hopkins was a volunteer and that his use of marijuana caused the accident.

But Judge James Jeremiah Shea of the state Workers' Compensation Court ruled last month that Hopkins is eligible for benefits.

Shea found that Hopkins was paid, and therefore he's an employee. The judge also concluded Hopkins' use of marijuana was not the main cause of the attack.

Further proof that God does indeed watch over fools.

I can only pray for the same regard when the
III-Time starts.

Weed and work do not mix.

There may have been no connection, however this buy is still a dumb ass.

This is too funny ..... which leads to the eternal question .... if a man smokes pot in the woods, do the bears know it?

Well, it was Jim Stafford who sung , "after smokin that wildwood weed , you come too just wanderin around behind the little animals" guess that lil animal didnt like having someone behind them......

One toke over the line.

Yes Sir God does indead watch over fools, as I've been one myself. But this man broke the law by being stoned on the job. Any and all injuries sustained under the influence make him liable for his injuries, only times have changed. We are in deep trouble as a nation with rulings like this. Great site Mike!

Hmmm... although the judge was probably right, in that the impaired state was not the proximal cause of the attack, one HAS to ask - what kind of freakin' IDIOT is so unspeakably stupid as to wander into a cage - or drive, or operate heavy machinery - when not at the top of his game.

True story - years ago, I went with an acquaintance who was going to pick his wife up for lunch and ride around in the car taking in some local scenery while she ate. I was off work that day and it seemed like a pleasant idea. Until.
After she finished her sandwich and fruit, the husband pulled out a huge joint and the two of them proceeded to smoke it down to the smallest imaginable nub. ( They DID offer to share but I was not interested.)
Turns out that they did this every day - just routine for them. But the kicker is not that the husband managed to avoid wrecking. The kicker was that the wife had a job which one would assume required total concentration.
She was the head accountant at an insurance company.

Mike, a bit off topic, but you have to watch this Marine sing!! At a Tea Party, he sings the extra verse that we never get to hear - The Star Spangled Banner.

Hang around a mushmind stoner for a while and experience the thrill of watching self-induced retardation. Sitting on a couch in Mom and Dads basement, the stoner, tells anyone who will listen about all the great ideas they have. Fast forward,twenty years later,the stoner is sitting on the same couch, in a stoner buddys basement telling anyone who will listen about the raw deal that life and the"MAN" have dealt him! Pathetic,obnoxious,shitbag losers.

That said, I'm not sure there are too many things that mix well with grizzly bears.

Perhaps the quickest way to end the culture of dependency and irresponsibility is to legalizing most drugs and then let natural selection weed out the minority that cannot use them responsibly.

Anon. Hearing that former Marine sing left a lump in my throat.

Jamaican for "Hi test HE"

Too bad the bear didn't do a better job of cleaning up the gene pool.