A rather spectacular failure of "juche." 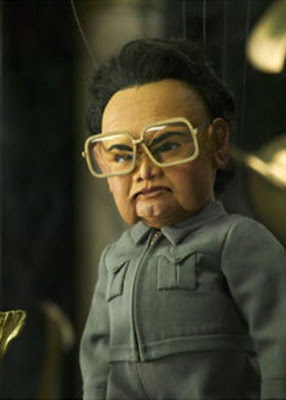 The Juche Idea (Korean pronunciation: [tɕutɕʰe] approximately "joo-cheh") is the official state ideology of North Korea. It teaches that "man is the master of everything and decides everything," and that the Korean people are the masters of Korea's revolution. Juche is a component of Kimilsungism, North Korea's political system. The word literally means "main body" or "subject"; it has also been translated in North Korean sources as "independent stand" and the "spirit of self-reliance". -- Wikipedia.

Well, y'all know I'm a soccer dad so the World Cup matches play at our house now that we have finally acquired cable after twenty years of doing without. As you also know, I try to keep an eye on what's up with Kim Jong Il -- for grins and giggles if nothing else.

Going into today's match against Portugal, the DPRK team had done well in an earlier albeit losing match to Brazil. The biggest news was that the North Korean coach talked to Dear Leader during matches for tactical advice over an invisible phone invented by Kim himself. I kid you not.

Of course, you probably didn't know it, but Dear Leader also invented the hamburger.

Anyway, so today the Apostles of Juche played Portugal in the rain in South Africa and either the invisible cell phone wasn't working or it was a bad day for Juche.

Now that ain't much for American football, but for international soccer it is a blowout of deeply humiliating proportions. With today's rout, which looked like his Daddy's armies fleeing North from the Pusan Perimeter after Inchon in 1950, Kim's team has been eliminated from advancing.

If I were a South Korean right now, I'd be taking an overseas vacation. The little runt is undoubtedly deeply pissed.

I was hoping that they would face off with S. Korea. Switzerland today! Just so you know who I care about in today's line up. I am pulling for USA first and foremost and then Deutschland. I agree with my fiance that the N.K. team is all Chinese players, so as not to have defectors and other problems later when they return home. I was amazed Brazil struggled with the N.K. team. I am glad Portugal stomped them into the ground.

Hell, I was wondering if the NK team would try to defect.