Bilderbergers talking about "global cooling"? Has anybody told Al Gore or the "Cap and Tax" crowd? 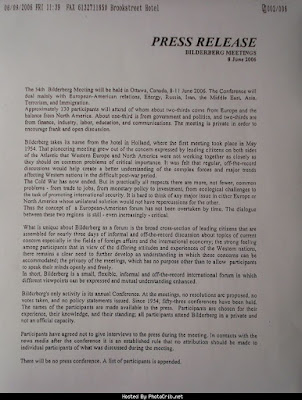 Those of you who have been reading me for a while know that I'm not into the whole "NWO is out to eat your momma" conspiracy mantra. There is no big spider in some central web out to steal your liberties. There are demonstrably many spiders in many competing webs and they occasionally eat each other as well. I figure the best anti-arachnid strategy is that of the Founders: a wide-awake, trained ("well-regulated") and militarily capable armed citizenry. But I found this more than a little interesting. A snippet:

The 58th Bilderberg Meeting will be held in Sitges, Spain 3 - 6 June 2010. The Conference will deal mainly with Financial Reform, Security, Cyber Technology, Energy, Pakistan, Afghanistan, World Food Problem, Global Cooling, Social Networking, Medical Science, EU-US relations. Approximately 130 participants will attend of whom about two-thirds come from Europe and the balance from North America. About one-third is from government and politics, and two-thirds are from finance, industry, labor, education, and communications. The meeting is private in order to encourage frank and open discussion.

Wait. What? "Global cooling"? Has anybody told Al Gore or the Mighty Kenyan and all of his Capitol Hill sycophants who are trying to ram "Cap and Tax" down our throats?

A list of invitees doesn't include old Al. Maybe the global elites have decided that global warming no longer suffices as a shaman's rattle to awe the skeptical villagers. 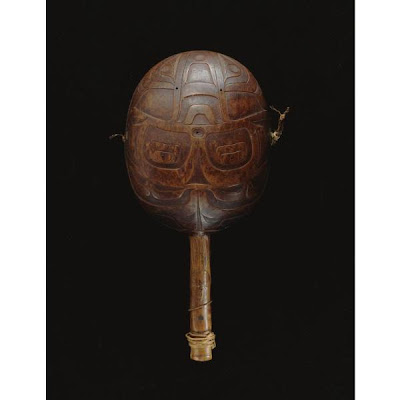 Shaman's rattle. Al Gore, call your office.
Posted by Dutchman6 at 5:57 AM

There is no big spider in some central web out to steal your liberties. There are demonstrably many spiders in many competing webs and they occasionally eat each other as well.--MVB

The only reason we still enjoy a small measure of liberty is because collectivists cannot agree among themselves which variant of socialism is definitive.

Happily, this sometimes leads to their killing each other, as witness the NAZI vs Bolshevik dust-up. At a more personal level, a rival such as Trotsky will occasionally attract a bullet.

The one good thing you can say about socialists is that they *do* kill each other. If this represented the majority of their activity, I would be willing to see a small subsidy given to them for the promotion of their agenda.

Alas, they sometimes stop their squabbling just long enough to fix their attention on lesser beings such as you and me. It is at such times that a good military-type rifle will help you break through their web.

Some of those spider webs are pretty big. There seem to be only a half dozen premier webs for the movers and shakers on each continent. There is too much internal competition to be a single unified NWO, but the "class struggle" does exist and the elites usually find their interests coincide with other elites more than the middle class they claim to be tending.

For example, a military-industrial complex needs a foreign boogyman as a sales pitch for itself. During the cold war, the US intelligence community, military community, and political leadership lied about a missile gap relative to the USSR. I assume the USSR told the truth about a real missile gap with the US. Each country was presented as the other countries' foreign boogyman, and so by cooperating, both countries' socialized war establishments were able to grow.

Today's foreign boogyman is the Mooslim Trrorists. A decade ago in there were at least twenty muslims willing to be competent terrorists. From the lack of similarly spectacular attacks since then, it seems the CIA hasn't been able to recruit another twenty yet. Maybe the Mooslim population the recruiters draw from is as passive in the face of colonial oppression as the Ammurican population is.

If this is accurate, I expect the results will be the same. In essence they'll throw the skeptics a bone, buy new letterhead and create a new theory on why technological development is going to kill us all.

I have absolutely no doubt that the solution to the "global cooling" that will otherwise surely kill us all, will be more government controls on energy. They'll start with Cap & Tax, which will be proven to also work on cooling.

A cooling cycle could well be on its way, the earth goes through natural warming and cooling cycles constantly.
The funny thing about 'global warming' is that scientists are not really worried about the globe warming they are actually worried because the global temperatures have remained relatively steady since right around the industrial revolution and have not demonstrated the historical ups and downs.

Sleight of hand. Misdirection. Stock in trade.
Manipulate the masses.

Motive and Opportunity...
the stock in trade of the detective.

Global cooling? Wow, the 1970s are coming back! (Anyone else remember Tull's album, "Stormwatch"?)

WV:fermoni, the real reason the Green movement shovels their BS...