"Purifying the World" -- the latest collectivist hogwash about purging the world of evil and the perfectibility of man. 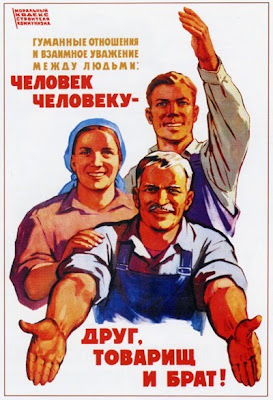 The Bolsheviks believed in the perfectibility of man. They called their ideal "The New Soviet Man."

Man will make it his purpose to master his own feelings, to raise his instincts to the heights of consciousness, to make them transparent, to extend the wires of his will into hidden recesses, and thereby to raise himself to a new plane, to create a higher social biologic type, or, if you please, a superman. -- Leon Trotsky, Literature and Revolution, on "the New Soviet Man." 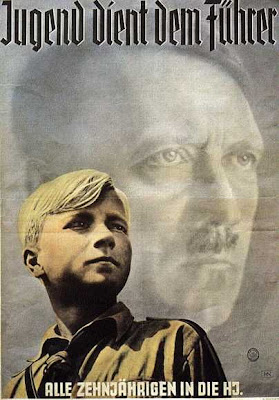 The Nazis believed in the "purification of the race." Their model was the Aryan warrior. Their version of "The New Soviet Man" was the
herrenvolk -- "the Master Race."

Blood mixture and the result drop in the racial level is the sole cause of the dying out of old cultures; for men do not perish as a result of lost wars, but by the loss of that force of resistance which is continued only in pure blood. All who are not of good race in this world are chaff. -- Adolf Hitler, Mein Kampf

Both variants of collectivism stacked up millions upon millions of bodies trying to achieve their view of perfection, of "purification." 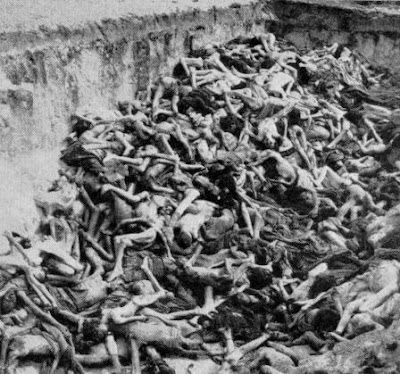 The natural by-products of collectivist "perfectibility" and "purification."

Courtesy of Pete at WRSA we have this link to an article in American Thinker which refers to this article on the "Purificationist" collectivism of today.

I read both the AT piece and the Sternberg essay.

One of the comments after the AT piece used the analogy that there comes a point where the cancer and host can no longer be separated without death to both. He fears we are there.

I fear he is right.

Yet I persist in believing there is something we can do to stop this although I don't think the Nov elections will matter.

Leaves us with no choices to make.
Fight to Win,or surrender and be slaughtered.
I have already made My choice...

The world needs a high colonic to purge itself of progressives.

Wow. There are few times in my short life where evil presents itself so plainly and unashamedly. I am only on page two (!) and I can't think of another so blatantly anti-Christ, anti-Christian, and anti-individualist article I've ever read.

For the curious, the nearest translation I can come up with for the Soviet propaganda is-

Humane treatment and mutual respect among the people:
Mankind- friend, comrade and brother.

I'm not even close to being fluent, so I may have screwed it up.

These guys are now in our judicial system. They call it therapeutic justice. They reside in the family, child welfare and drug "courts".

Interesting. "The person who can't read the paper isn't free." (U.S. Standards of Learning are resulting in an overall DROP in literacy and eliminating all-important context for what IS taught.)
"Neither is the man who has no job." (Our "evil capitalist system" is sending as many jobs as it can to Third World countries -- along with our deeply-desired hamburgers, Coca-Cola and jeans). You mean it isn't helping?
VERY interesting that this comes to light as Black Muslim president Obama turns his back on our strategically-located ally Israel, those Zionists.
It sounds like the Islamicists and others who chanted "Europe is a cancer; Islam is the answer" believe American Judeo-Christian free enterprise and free thinking GAVE Europe its cancer.
We've seen the alternative many times.
Once again the defecate on our men and women who died in WWII to keep Europe and the Pacific Rim free, and freedom of choice other than their own.
I judge political movements by how angry they seem to be with those who disagree. WE want to simply be left alone; THEY want us dangerous minds liquidated.
In this, they set themselves up as superior, when all men are flawed. I never trust anyone who claims to have all the answers.

These forces that stand against all that really matter in this life will not be purged without some catastrophe that we will be left finding our way though. That is the only sure bet, God will not allow this satanic disease to triumph but the medicine will not go down easy. Good Luck every one see you on the dark side of the moon.