Karmic Komedy: "Where is 'Hell No' Bill Newell?" ATF agents on CleanUp have fun with "Gunwalker Bill."

From CleanUpATF.org comes this post from agent Epic Failure":

Where is "Hell No" Bill Newell? The profound and confident nature that the "Hell No" statement was delivered with still makes me chuckle. Say it with me, "Hell No"! Makes you feel powerful, don't it?

Anyway, Gillett is strutting around the division with his standard arrogent, condescending and smug manner telling his friend (singular) that he can retire whenever he wants and that no matter what happens he'll "pull the plug" on ATF at a moments notice to protect his pension. Needles and Voth are hiding under their desks with their fingers crossed but, Where Is Newell?

See, the thing with Newell is he will screw anyone to the proficiency of the very best and dirtiest of ATF's hatchetmen but he does it with that Andy Taylor, Gosh By Golly, Gee Wiz, attitude that disarms some people. The naive ones at least.

Let me tell you this. Don't turn your back on him. Andy Taylor will slit your throat and when they find the body he'll blame it on someone else and claim he doesn't recall ever owning a straight razor.

Where in the Holy Gee Willickers are you Gungiver Bill?

Then Agent Iceman posted this "AMBER ALERT!" early this morning:

Where is Bill Newell? He should be in Mexico City doing what ATF pays him for, but we KNOW that ain't happening. He is apparently not in Phoenix doing his day job. In fact, word is that Needles will be in HQ for awhile, while Gillette reportedly no longer has authority over working Agents. So, the tax payers will get to pay per diem to bring in an Acting SAC. No wonder we are broke. 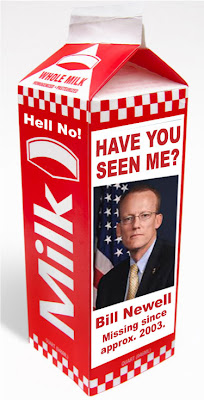 Retired and Loving It responded:

Iceman, why do you say that Newell in Mexico City ain't happening?

As I see it, the smartest thing ATF could do is send him to Mexico City. Now that the Mexican Government knows what's been done, sending him there would relieve ATF of any disciplinary action as I fully expect that the problem would be taken care of for them in Mexico. If he is really missing in action, count on it that he is on full pay "administrative" leave or "working" at home while ATF and DOJ figure this mess out over the course of the next 5 or 6 years. Nice, huh! But then Russell Vanderperv got this same kind of deal for over a year.

By the way, does anyone know what has become of Loos? Haven't heard many complaints about her lately. Did someone finally stick her in the broom closet she belongs? Maybe she could be sent to Mexico with Newell as his personal attorney. I seriously doubt that either one of them would take the transfer as they probably value their lives. So they quit and ATF, DOJ, and the taxpayer no longer have to foot the bill for them.

We really need more creative thinking managers up there in 99 NY Ave.

It'll be a lot easier to blame it on the dead guy.

Mike....you and David watch your backs. There's a good chance some high level careers and pensions are at stake here.

Hopefully some prison time, too.

I love the milk carton.

I'm sad to see so many derisive comments leveled at Bill. I had the pleasure of working with him in Brownsville, Texas for many years. He was everybody's go-to ATF guy, and the hardest-working ATF Agent I've ever had the honor to work with. He was ballsy and honorable, and beyond reproach in everything he did. He's one of the many ATF guys I've worked with who I would follow into the gates of hell.

Better call Bill. I think some people in Washington may be making him some reservations. He will need some company.