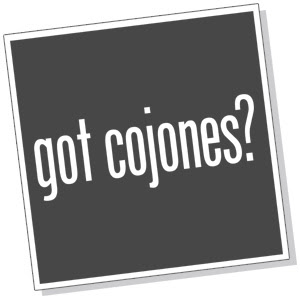 Ken Melson may be missing his one of these days.

FYI, Melson. They want your cojones on a stick. And I don't blame 'em a bit.

As we have reported, agents from the Bureau of Alcohol, Tobacco and Firearms say over the course of a year and a half, superiors ordered them to allow thousands of weapons to cross into Mexico as part of a failed plan to gain intelligence and take down a major drug cartel.

Over the weekend, the Mexican attorney general stated: "The controlled trafficking of weapons is not authorized under the Mexican national legislation. An operation that would contemplate this would not have been acceptable to the Mexican government, and it will never be under any circumstance." The Mexican Attorney General also stated that it's conducting its own investigation to identify "the crimes that could have been carried out on Mexican territory."

Those statements were made one day after CBS News' exclusive interview with the former top ATF official in Mexico, Darren Gil. Gil stated that his own agency kept details of controversial operation known as "Fast and Furious" secret from him and his Mexico-based staff.

He also said that when he objected, his ATF supervisor in Washington repeatedly told him the case had been approved not only by ATF Acting Director Kenneth Melson, but also by the Department of Justice, which oversees ATF.

Last week in an interview with the Spanish language network Univision, President Obama said that neither he nor Attorney General Eric Holder approved Fast and Furious. He reiterated that an Inspector General is investigating.

Mexican authorities await the results. "The Mexican government was not informed of any operation that included the controlled trafficking of weapons to Mexico," stated the attorney general's office in its communiqu??© issued over the weekend. "Sanctions will have to be carried out with the full force of law to whomever could have been responsible for the commission of the illicit goods."

Allowing guns to reach criminal suspects and the street without stopping them is known as letting guns "walk": law enforcement insiders say it's normally strictly forbidden because the guns could be used to injure or kill people. Gil told CBS News that unusual numbers of weapons from the Fast and Furious case were turning up at Mexican crime scenes after being used by drug cartel members. As the case and the flow of guns continued, he worried that the weapons would be used to kill innocent civilians, police officers, or military or government officials.

On Dec. 14th, two AK-47 variant assault rifles that ATF allegedly let "walk" a year before were found at the murder of Border Patrol Agent Brian Terry. Officials are also investigating a possible connection to the murder of Customs Agent Jaime Avila.

Among the outstanding questions: who knew of and approved the Fast and Furious operation, and when? Was a gunwalking strategy deployed in other cases? What was the evidence that caused officials to release two illegal immigrants arrested at the gunning down of Agent Terry? Why has a third been held, but not charged in the murder? If none of the men arrested the night of Agent Terry's murder were responsible, are there any leads as to whoever was? What weapon was used to kill Agent Terry? Where are all the weapons that ATF allegedly let walk into Mexico, but have not been recovered? Of the weapons that have been recovered, in what crimes were they used?

Department of Justice and ATF officials have not agreed to our repeated interview and information requests. So far, they have also refused to provide answers and documents to Sen. Charles Grassley (R-Iowa) of the Senate Judiciary Committee, who is investigating. Rep. Darrell Issa (R-Calif.), Chairman of the House Oversight Committee, has joined the investigation.

Since Mexico is reluctant (opposed, even) to extraditing ANYONE to the USofA, foreign or domestic, who is under the possible death penalty -- I wonder if Melson & minions are under any danger of the USofA extraditing them to Mexico?

Is this the full force of law that the Cartels are so afraid of?