Someone sends an angry mob to my door. 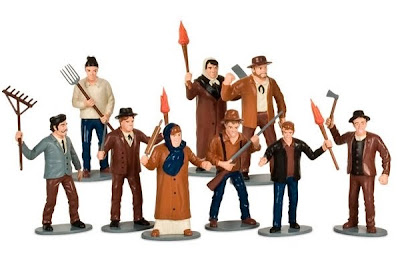 Today I received in my post office box an angry mob. Yes, it is the Angry Mob Play Set consisting of 9 hard vinyl figures, 2" to 3" tall. It comes with a warning they have small parts and are not suitable for children under 3 years old. There was no explanatory note, just 9 diminutive angry mobsters.

Who would send an angry mob to my door? Well, the box contains contradictory information. The return address reads as follows:

It is accompanied by this note on the outside of the box:

I can only imagine what the FBI drone assigned to read my mail thought of that. It is a wonder that the figures did not melt from repeated x-raying.

But back to the contradictory part. Despite what "Melson Kissimak 80-Feet" claims, the USPS package mailing label indicates that it came from zip code 20912, Tacoma Park, Maryland. It also indicates that while mailed on 19 March it took a full week to get to me, so the FBI theory is probably correct since it was sent "Priority Mail."

So, as to who would send an angry mob to my door, we are left with mere speculation. Friend? Foe? Fed? Feeb? Your guess is as good as mine.

LATER: It seems someone sent another similar angry mob to Len Savage's door, although his arrived some days ago. The plot thickens.

Even Later: A reader thinks that this might be a clue. I have my doubts, although I must say it is a vivid graphic full of, ah, anatomical angst.

Drat! Mike- the least they could've done is sent 24 pieces of differing colors so you could set up a chess board! Dang, of all the rotten luck.
Shy III

Probably just a joke. But just in case, I recommend you put up a no tresspassing sign in your yard. If an angry mobs shows up on your property, shoot the people in charge first. Then closest to futherest. Send out a call for reenforcements. The people coming to help you will be carrying weapons not signs.

Dang! Now I have mob envy. That's the cutest little angry mob I have eve seen! Who sells those?
And, I KNOW your angry mob couldn't be from Texas, 'cause I live here...and no self respecting mob from Texas would be armed with rolling pins, torches and pitchforks! Glock 9mm, an AK or two and maybe a SIG 556, but not pitchforks, honey!

Well, at least he has actually read your blog! :)

Point a Geiger counter at the things.

These figures I believe represent your followers, not those out to get you.

Must be government. Your average citizen can't afford $30 (plus priority mail) for a practical joke.

There is a lot of word play here. Along with the other anatomical references we have Melson as in "Dirty Melson" and the Arabic "Kiss Imak". I would not rule out an 'Anonymous' or anarchist group type prank.

"Burnt Scrotum, New Mexico" was a fictional town that was mentioned in a Married With Children episode. The one where Al gets some sort of award for his car lasting as many miles as it did, but it rolled over back to zero by accident and he drove around the country trying to get the miles back up.

Seems to be an implied threat of future action by folks who will not have your best interests in mind. The fact that the fibbies sat on it for a week and then released it could mean they are happy to have some other entity do their dirty work. Make no mistake, by now they know precisely who sent it. Diligent perimeter awareness is called for as well as a group of true friends on immediate ready.

Much as you terrorists-in-training talk about "putting people on our list," you'd imagine there might be some other people putting YOU on THEIRS. I guess smarts ain't really the patriot thing, eh?

you should check closely for microphones or tracking devises.

Can you even begin to comprehend how bad an idea any harm to Mike would be?

Let me clue you in. Some of us here make weapons for a living. Some use them for same.