"The Test." Obama lets slip that Gunwalker is on his mind. I heard this on a talk radio show and I wondered if I was the only one who got it. 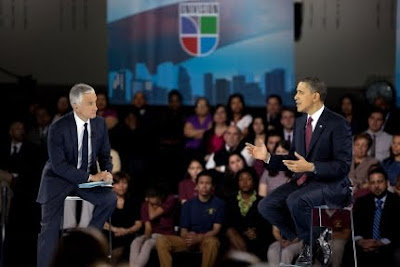 So, Barack Obama was on a Univision Town Hall the other day with Univision anchor and talk show host Jorge Ramos, the same fellow who grilled the President on Gunrunner.

And in amongst the mostly innocuous questions was this:

RAMOS: We have talked about different topics, very important, giant concepts, but the main concerns of our children are more concrete. It’s about tests. When was the last time you took a test -- do you remember that?

To which Obama replied:

Let me tell you, I am tested every day. (Laughter.) I was tested when I appeared on Jorge’s program a couple of -- four days ago. (Laughter.) He’s a very tough instructor, a tough -- he’s a tough grader. (Laughter.)

Well, then. So Obama lets slip that Gunwalker is on his mind. Interesting.

Okay, but if he thought that THAT was a test, it wasn't. It was just a pop quiz with no grade impact. Obama's "test" on the Gunwalker Scandal has yet to be scheduled. It may be the final exam of his presidency, and he is in grave danger of flunking it.
Posted by Dutchman6 at 10:05 AM

You know Obama was on this from the start, as a way to shore up the Greta-Hillary expose.

The Second Amendment was the target not the drug cartels. They needed some real evidence that they could wave around.

You just got in their way.

It would be ironic if this POTUS lost his presidency over a gun running coverup.

in the vanguard said...

As long as he breathes, he'll lie. It's quite easy to take whatever he says one day, to show he said differently another day. But no mainstream media call him on it. And that blogs, like yours, do - who knows if it has any impact? This guy, had he been a Republican, would have had impeachment proceedings started against him dozens of times. Yet this character gets away with murder - day in day out - and all is calm!

Living in his head rent free...

At least Michelle Malkin gave ya'll credit, Mike, you and David Codrea, that is. Look at her column today. She's got a lot of readers.