Help vindicate R.A. Bear. -- IT IS TIME TO DEMAND CONGRESSIONAL OVERSIGHT HEARINGS INTO THE ATF'S SCANDALS. 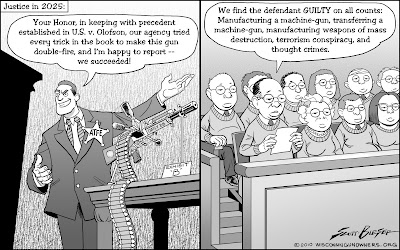 The latest move to bring in the Chicago Gang's favorite gun grabber, Andrew Traver, to become ATF Director means, among other things, that the Obamanoids intend to try to choke off congressional oversight by saying, "See, we've got rid of that old woman Melson and the criminal fools in the Chief Counsel's Office, so there's nothing to see here, citizen. Move along."

Some heads, we hear, are already rolling. Some more will roll. The question is can we force a hearing (or force our witnesses into one already scheduled by means of pointed questions under oath). There are many ATF victims, whistleblower agents and experts who can testify -- David Olofson, Len Savage, Doug Friesen, Albert Kwan, Ryan Horsley among others. Certainly Zorro, of the Garand importation scandal and the dissident agents at CleanUpATF.org could also lend their testimony.

But the prime witness, the one personage which the ATF absolutely does not want to answer questions about is R.A. Bear, the child's stuffed toy which they spent two years and at least a million dollars chasing all over the country.

Offered up as a suspect when one of the ATF's highly placed snitches in the firearms community was pressuring an acquaintance of Len Savage's for information, R.A. Bear took on a life of his own. Popularized in this blog and others, he was paged at gun shows and machine gun shoots all over the country -- most notably at Knob Creek where agents ran all the way to the main gate to see if they could get a glimpse of the elusive Bear. The ATF Chief Counsel's Office asked witnesses about him under oath in depositions, always eliciting the response: "I know of no such person as Ramsey A. Bear."

So eager were they to wreak an "economic Waco" on Len Savage that they obsessed about a child's toy in an effort to frame an innocent man and destroy his business, simply because he had the temerity to testify against them in court on behalf of the agency's victims. All at a huge waste of taxpayer dollars.

The present day mantra of both corrupt political parties is the claim that they wish to abolish "waste, fraud and abuse."

Let's take them at their word and demand of the new Congress and Senate an investigation into the waste, fraud, abuse and crimes of the ATF. And they can start with their wild bear chase after a child's stuffed toy.

Call, write and email your congresscritters and senators today. Post this on gun discussion groups, clean government and libertarian blogs. Call and write the NRA and watch them squirm. Demand vindication for R.A. Bear.

(I have it on good authority that he will show up if asked.)

Mike Vanderboegh
The alleged leader of a merry band of Three Percenters.
Posted by Dutchman6 at 10:52 AM

When Traver becomes the head of the BATFE, we should all start mailing him cheap stuffed toy bears with a little note from R.A. Bear welcoming him to his new position.

Good idea. Send them postage due.:)

On a different note, using Firefox 3.6.11, your Captcha doesn't work. I must have tried a couple of dozen times to comment on other posts, and got nowhere.

As a Jewess in the US, I can only say that this article demonstrates that all REAL Americans must now put our 2nd Amendment FIRST!!