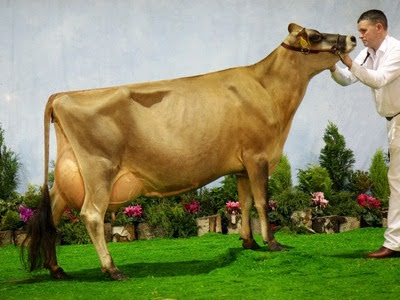 A Jersey Cow: "Give Officer Too Friendly a big kiss, Bessie."

New Jersey man serving 7 years for guns he owned legally I liked this part of this sorry story.

A few weeks after Aitken's trial over the summer, Morley learned that Christie was not going to reappoint him, due in part to a 2009 case in which he dismissed animal-cruelty charges against a Moorestown cop accused of sticking his penis into the mouths of five calves. Morley said there was no way of knowing whether the calves had been "puzzled" or "tormented" by the officer's actions.

A spokesman for Christie acknowledged that his office had received clemency requests for Aitken, but declined to comment further.

Love the comments from CeaseFire about how even if the guns were locked and unloaded to be legally transported, "high"-capacity magazines and hollowpoints are illegal in NJ, so he's a felon anyway, so there. Doesn't matter that he, like Bill Doss of California, contacted the authorities before doing anything.
Consider that CeaseFire spokesperson Whoopi Goldberg said opting out of the TSA naked scanning is practically an act of terrorism in itself.
Another comment celebrates "white boys gone wild!" getting what they deserve and suggests doubling the sentence.
It's easier all the time to see why, if people don't have an inner core of goodness and morality, they just say "F--- it " and go full-out thug. The penalty won't be any worse.

Ya, as usual, our masters have us by the balls. Oh, "even if Aitken was in the process of moving....it doesn't excuse his owning hi cap mags or hollowpoints. No sir, not in New Jersey!"

The definition of freedom is probably quite different in new jersey. In Arizona they don't even blink. In jersey he gets 7 years. I'd be pissed enough to start killing people over that. If he does, In my book, he's more than justified. No good sacks of shit.

What about it Christe?

BTW, mom's a colossal dumb shit too but as a social worker, I'd expect that.

Sorry to say this, but Aitkin showed some lack of intelligence (or experience) when he allowed the NJ Stazi to toss his car without a warrent or an attorney being present. Too bad. I hope he's allowed to get out quickest, and then has the smarts of experience to leave the state. Thanks, Mom!

I agree with Defender on this. When we have people out there making comments like this, we are truly a lost nation, specifically if those were Americans making those comments. I'm assuming they are. People have become so dumb, and so dependent on the government for everything, its hopeless to turn it around. The Kool-Aid drinking and sucking up to the government teet is out of control. I just don't know as a nation how we can ever survive.

He screwed up, never talk to police. Demand a Lawyer first thing. Never let a cop search anything without a warrant.
Still 7 years is much for being ignorant of The New Fatherland's laws.
Christie needs to pardon this guy.

I tried to appeal to his sense of justice and proportion. He wants the size and scope of government reduced; the Aitken case is a wonderful example of how arbitrary laws and overzealous enforcement of them are a waste of resources and erode respect for government.

His REAL mistake was coming home when the cops asked. If mom was "worried", then he should have said, "Naaa, I'm late. But put her on the phone is she's worried. Don't worry, I'll talk to her..."

Unless the lights are flashing, or the flash bangs booming, I'll stay away, thank you very much.

What can One Say except Jersey Sucks, and yes I have been there. Didn't try the calves though, My ex(from there)was good enough.

And with all the B/S I've pulled Momma never Called the Cops, Thanks Ma, Love Ya.

Was Mr. Aitken actually a resident of NJ -yet? And was the search of his TRUNK consentual?

Never talk to or allow the cops to search w/o a warrant!!!!

What an innane law. I carry hollow points to be SAFER, since FMJ tends to penetrate further than an HP that expands or breaks up easier if it hits a solid surface.

Geeeze Louise, those folks in NJ got rocks in their heads. Another state to avoid.

Time for Mr. Christie, the practical man that he appears to be, to step up and get this otherwise upstanding young man back to his life w/o the official blemish on his record.

Scroll down a bit.....he supported the AWB under Clinton.

Christie is a RINO. Don't buy the hype.

FMJ will do better on body armor than HP. Not as good as AP, of course, but nonetheless better.

I know an old urban slang term for a beat cop is "bull," as in "Chickie, the bulls!" meaning "Vacate the vicinity, the constabulary approaches."