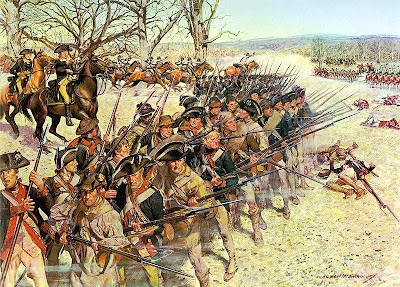 The Battle of Guilford Court House was a battle fought on March 15, 1781 in Greensboro, the county seat of Guilford County, North Carolina, during the American Revolutionary War. A force of 1,900 British troops under the command of General Lord Cornwallis defeated an American force of 4,000 under Rhode Island native General Nathanael Greene.

Despite the relatively small numbers of troops involved, the battle is considered decisive. Before the battle, the British appeared to have successfully reconquered Georgia and South Carolina with the aid of strong Loyalist factions, and thought that North Carolina might be within their grasp. In the wake of the battle, Greene moved into South Carolina, while Cornwallis chose to invade Virginia. These decisions allowed Greene to unravel British control of the South, while leading Cornwallis to Yorktown and surrender. -- Wikipedia.

I will be speaking at the Restore the Constitution Rally at Guilford Courthouse National Military Park in North Carolina on Saturday, 14 August. The 220 acre GCNMP is the nation’s first national park established at a Revolutionary War site, and among the 28 monuments on the battlefield is a memorial containing the graves of two of North Carolina’s signers of the Declaration of Independence, William Hooper and John Penn. Thus, it will be somewhat of a pilgrimage for me, as I have never been there.

I look forward to seeing y'all there.

It sounds interesting. I might go. Not sure yet, but I might. Do you know if bayonets are allowed?

I and another IIIper will be there, it should be a great time and weather looks to be good.
TomIII

Cornwallis lost 28% of his men killed, and calls it a victory. Sure he wasn't French?

I will be there!

I will be there to take pictures. I will of course send you links to them.

Mike please watch out for your feet, Keep ´em dry and cool.
I can´t make it I´m as broke as I´V ever been in my life. the little money I had picked up I had to spend on my Grandson´s doctors bill. He went to the Hospital for a severe Asthma attack, we did´t even know he had asthma.

and i look forward to your speech.