How not to end a hostage standoff on a bus. 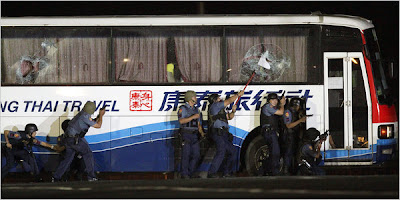 I just spent an hour and a half watching Manila's Keystone Kops take down a bus hijacker. It was about the most painful 90 minutes of television I've seen recently (because lives were on the line, it was marginally worse than an Obama State of the Union address). I'm sure that footage will be available on YouTube later, but I watched it on CNN International and the experience had me hoping that the hijacker would shoot the clueless, chattering CNN newsbabe.

I could have taken a scratch militia squad on the fly and done a better job. Where were the entry explosives? Where was elementary coordination? Example: When the MPD FINALLY got the rear side exit open and entered the bus, they received fire and tumbled back out again. Where was the MPD shooter to take the SOB in the back through the holes made by the sledgehammer in the bus' front windshield in some sort of rudimentary coordinated action? Hell, they didn't even have stepladders to get them up to firing positions. Neither did they seem to have anyone who understood how to open the bus doors by reaching inside and manipulating the mechanism once the glass was knocked out.

Worse, none of them seemed to be armed with a weapon capable of penetration shots through safety glass. Like the hijacker, the largest caliber weapon the entry team had was a 5.56 M16. There may have been snipers with larger weapons on overlook positions, but if they didn't have a shot once it was clear that the action was going to be entirely ON the bus, why weren't they shifted to bus level?

One thing was painfully clear. The cops were much more concerned about not getting themselves shot than rescuing the hostages. When the gunman (a former police supervisor) ineffectually fired half-a-mag on full auto through a side window (well above the team members' heads), they ALL scarpered like Sir Robin.

Finally, it is worth pointing out that once again this was a victim disarmament zone full of sheep unable to defend themselves.

The hostage-taker, **former police officer** Rolando Mendoza, [finally] died of a gunshot wound to the head, and at least two hostages were killed, police said.
He was demanding his police job back.
(NOT sarcasm.)

Note to self, pick up a dozen each flash-bangs and smoke grenades.

The whole "demanding his old job back" reminds me of the "former mayer Ron Miller" scene in Robocop.

As bad as things might be in AmeriKa, at least Im able to carry a gun here. Note 'able' is different than the gubmint giving us permission... Besides many of us have given up on ALL mass transit, including the sky.

Can anyone say 6.8SPC? Mogadishu, Afganistan, Iraq, what's it gonna take to get rid of that pesky, ineffectual varmint round they call 5.56? Sorry, talking to myself again.