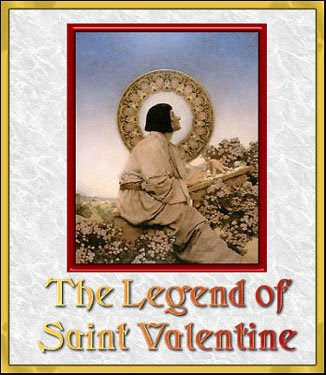 H/T to John Russell for the forward. I do not know this post's provenance, but I know it warms my heart.

Little Melissa comes home from 1st grade & tells her father that they learned about the history of Valentine's Day.


'Since Valentine's Day is for a Christian saint, and we're Jewish,' she asks, 'Will God get mad at me for giving someone a valentine?


Melissa's father thinks a bit, then says: 'No, I don't think God would get mad. Whom do you want to give a Valentine to?'


'Why Osama Bin Laden?' her father asks in shock.


'Well,' she says, 'I thought that if a little American Jewish girl could have enough love to give Osama a Valentine, he might start to think that maybe we're not all bad, and maybe start loving people a little bit. And if other kids saw what I did and sent Valentines to Osama, he'd love everyone a lot. And then he'd start going all over the place to tell everyone how much he loved them, and how he didn't hate anyone anymore.'


Her father's heart swells and he looks at his daughter with new found pride.

'Melissa, that's the most wonderful thing I have ever heard.'


'I know, ' Melissa says, 'and once that gets him out in the open, the Marines could shoot the bastard.'

'I know, ' Melissa says, 'and once that gets him out in the open, the Marines could shoot the bastard.'

LOL LOL!!! I KNEW the ending would be something like that.

Thanks for posting, that was an EXCELLENT one.

I am wiping away the tears and find myself softly humming Kum-Ba-Yah...

Ah, umm, ... Valentine's Day is
generally not emphasized in
yeshivas... but I get the picture.

To j3maccabee: the new words
start out Mum-bai-yah
and it's not a huggy type song.
I haven't quite caught them all
yet.

Here's something to tell all
school kids:

Lockdown, lockdown, lockdown. No, no, no. When the terrorists began their assault at Beslan, around 40% of the students and staff ran like cuh-razy to get away from the school. A few hid in the boiler room. Every single one of those children and adults lived. from: http://freemendo.typepad.com November 2007

once again: Lockdown is nothing more than an attempt to keep collateral damage to a fixed number. Its their (failed) hope that the maximum number of students who will die will be the number locked inside the room or hall with the shooter. from the prolific computer book author Greg Perry


The martial arts got discussed
recently in one Jewish forum, and
the following were recalled:


Dhu Nuwwas had a Jewish monarchy in southern Arabia, and the Bene Israel of India have always been involved in the Army.


The great talmudic scholar Shmuel haNagid (Samuel the Prince) (993-1056 CE) was the commander of the army of the ruler of Granada.
That raises some fascinating questions as to who was fighting
whom. Then there's the tantalizing
story of Mar Zutra II, who was Exilarch (Chief of the Jewish Community) in what is now Iran c. 500 CE, who armed and led the Jewish Community there after Kavadh I (The ruler of Persia) allowed Mazdak, a proto-Communist to incite mobs who were destroying Persian businesses, Jewish and Gentile. Mar Zutra II died in the battles that followed. (Kavadh I later turned on Mazdak) This is taken from Rabbi Marvin Antelman's To Eliminate the Opiate (1974) which has some differences with the episode as described in Wikipedia, IIRC.