Book Review: Neither Predator Nor Prey 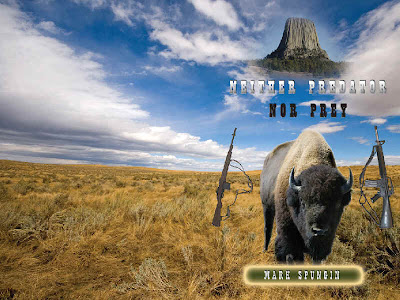 "America became less free with each passing generation. By the end of the Twentieth Century, the tempo of this loss of liberty had been greatly speeded up. The process had, however, been imperfect, with some parts of the country remaining much less oppressive than others. In no case was this more true than in Wyoming."

So opens Neither Predator Nor Prey.

For all of you who are needing something to occupy you until Absolved comes out, I can think of no better substitute than this tale from Mark Spungin.

Mark is a retired US Army Master Sergeant who spent three years in the Regular Army and thirty years in the Wyoming Army National Guard. A Viet-Nam veteran, he served as a rifleman with Company B 1st of the 7th Cavalry in 1966. His Wyoming Guard service included the jobs of engineer and medic, and he spent the last five years in the Guard as State Marksmanship Coordinator. In civilian life, he worked as a truck driver, hard-rock miner, and Registered Nurse. A long-time competitive shooter, Mark is a Distinguished Rifleman, Distinguished Pistol shot, earned the National Guard Chief's Fifty Badge and currently serves as president of the Wyoming State Shooting Association (WSSA).

All of which goes to tell you that Mark knows shooting and he knows his state. They say that you should write about what you know. Good advice. That is why Absolved is set in northern Alabama, my beloved, adopted home. Mark likewise brings a sharp eye and a lover's heart to this story. He loves his native state and it shows. This sometimes shows up in funny ways.

"One of Bilson's most pleasant surprises when he moved to Wyoming was how different the women were from those back in New York. They drove pick-up trucks, with stick-shifts no less. They hunted, they fished and they field-dressed their own game. Wyoming women owned guns and liked to shoot. It amazed him how many of them carried pistols in their purses."

I was reminded of the old joke, that works for just about any western state: "Wyoming, where the men are men (and the women are too)."

Jokes aside, though, Spurgin puts his author's finger on the pulse of the west and especially the Big Sky country -- here, at least, people are free. They live free and they intend to stay free.

I won't spoil the book by giving away the plotline nor the ending. I do, after all, want you to buy this book. It is, however, not giving away too much to share with you the final paragraphs:

"I realize this is Monday morning quarterbacking," asked the President the next morningt, "but what should we have done differently? You have to admit we were sorely provoked."

The Vice-President thought for a moment and gave his answer, "That may be true, but in my humble opinion, we really should have jut let those motherf---ers alone."

Rated five out of five stars on the Sipsey Street scale, with an extra asterisk for really creative ways to dispose of dead bodies, Neither Predator Nor Prey is a must read for Three Percenters.

You may obtain a copy by sending a check or money order for $20.00 to:

Or, click on the link above to order using Paypal.

Mark's email address is mspungin@ymail.com
Posted by Dutchman6 at 4:25 AM

When ordering the book, I would suggest that you call. Mark is an absolute delightful person to talk with.
As for the book, GET IT!! If you can put the book down after reading the first chapter, you are definitely reading the wrong genre of book!
I highly recommend it to everyone that I know.
I won't give away the story line either, but I will tell y'all the message that Mark wants to give out with the book, "We can and will win".

Agreed on the need to add this book to your freedom collection. It could have been written as a series of tactical bulletins, but Mark had the skill and smarts to weave those advisories into a fine novel.

We can and we will win.

There's too much negativity, too much whining floating around, by defeatists on some gun forums. Mark's book is a great antidote for that. Not only that, it is also entertaining to read, and Mark's wit shines through strongly (he is indeed the "real deal"). Highly recommended.