Anarchy Breaking Out All Over on Sipsey Street 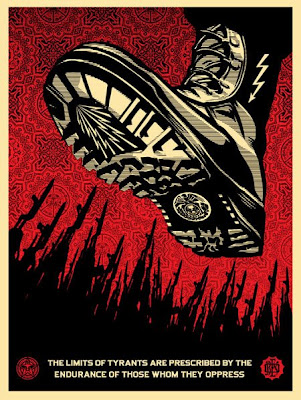 Lord have mercy, but there's a lot of down-home sectarianism breaking out on Sipsey Street. Let's see we've got our anarchists, and our libertarians and a one man Alexander Hamilton Anti-defamation League, and a whole lot of other folks arguing about a whole lot of other things.

Reg: If you want to join the People's Front of Judea, you have to really hate the Romans.
Brian: I do!
Reg: Oh yeah, how much?
Brian: A lot!
Reg: Right, you're in.

Now I've been fairly relaxed about what doesn't get posted as comments here. I have actually rejected very few posts, most for veiled threats or foul language. However, that was before all this sectarianism showed up.

But we have come to the point where I need to exercise a little adult supervision. Look, guys, my attitude can be found in the caption on the illustration above.

First, there is no ideological purity test for Three Percenters other than a belief in the natural, God-given rights and liberties that are merely codified by the Constitution of the Founders' Republic, and that such rights extend to all regardless of race, creed, color or religion. That's it. You can be an anarchist, libertarian, atheist or even a Baptist (hey, that's me, go figure). But save your ideological carping for the day after the collectivist boot is out of all of our faces.

In the mean time, if you don't like the Christian libertarian perspective which I'd like to think this blog is based on, you are certainly free to express that on your own blog, or the blog of the Judean People's Front, or the People's Front of Judea.

I spent too many hours in my mis-spent youth watching the Young Spartacist League argue interminably with Trostkyites over how many socialist angels could dance on the head of a dialectical pin. Save it. There's a boot coming your way and the guy that owns the foot inside it doesn't care what your individual politics are. He's an equal opportunity oppressor. He's the one you need to be worried about.
Posted by Dutchman6 at 12:18 AM

"We must hang together, gentlemen...else, we shall most assuredly hang separately."
- Benjamin Franklin

I appreciate this site because it pushes the very edge of Free Speech. I agree that threats to persons and the like go too far, though.

Even though a few of my ancestors were undoubtedly members of the Peoples Front of Judea...or was it the Judean Peoples Front??, I don't mind the Christian perspective. I've been ignoring a lot of stuff I don't believe for most of my life (no offense folks); when you hook up with a lot of people from diverse backgrounds you have to do that, in order to accomplish the common goal you all have.

Reach your goal, THEN split up into 10 different, equally ridiculous, factions and have at it. So long as the common enemy is beaten first, go knock yourselves out.

"In the mean time, if you don't like the Christian libertarian perspective which I'd like to think this blog is based on, you are certainly free to express that on your own blog,"

I actually very much agree with the perspective you come from. That's why I'm here. I just think that we need to demonstrate a little foresight. In the event there is a restoration (peaceful or otherwise) you still are going to see some dramatic changes in our Constitution. This is a good thing and a bad thing. We need to be able to amend the document so as to prevent us from coming back to this place in history. Unfortunately others will use the opportunity to completely change our form of government. I hadn't intended to advertise, but since you've requested, that's what I cover in www.thejohnpauldingfiles.com .

What I'm afraid of is that a new Revolution would mirror the French Revolution more than the American one. I think that is a real possibility judging from the attitudes of most Americans. What I mean by that is that I wish to avoid the anarchy and barbarity that came with the Terror.

You do a good service here Mike, so I'll shut up about AH.

It's really quite simple, we are Americans first or we are something less.

If we are something less then none of us matter and it makes no difference who wins. Either before or after the restoration.