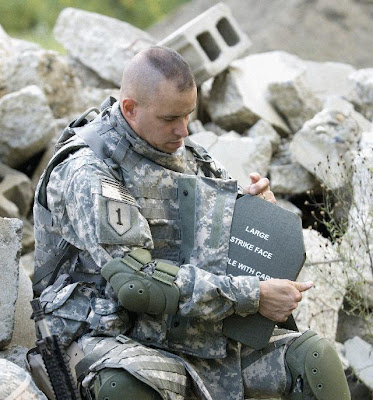 From Strategy Page. Note who's making our SAPI plates these days.

February 12, 2009: For over a year, the U.S. Army and Marines have been replacing existing SAPI (Small arms protective inserts) ceramic bulletproof plates (for protective vests), with thicker, but heavier ESAPI plates. The new ESAPI provides protection from armor piercing bullets, which enemy snipers are increasingly using.

The basic "Level 3" SAPI plates are 10x12 inches, weigh 4.6 pounds each and cost about $400. The older Level 4 plates, weighing about 6.4 pounds each, could stop armor piercing bullets, and the new XSAPI weighs about six pounds and have the same stopping power. ESAPI is more expensive, at $600 a plate. There are also smaller plates that can be worn on the side. Despite pressure from politicians to force the troops to wear the side plates (which constrict movement and add weight), the generals dug in their heels, and were allowed to let local commanders to decide if side plates had to be worn.

While the troops appreciated the additional protection, they noted two things.

First, the extra three pounds for the heavier front and back ESAPI plates added to the already hefty load they had to carry. Troops also noted that they rarely encountered enemy troops using armor piercing bullets. Thus the older SAPI plates were preferred, simply because they saved three pounds of weight. That three pounds made a difference, probably more psychologically than physiologically. But weight is a big issue, especially when operating in tropical climates. Troops do all sorts of things to save weight, and using the less sturdy SAPI plates is just one of them.

SAPI are made of boron carbide ceramic with a spectra shield backing. This combination causes bullets to fragment and slow down before getting through the plate. Occasionally, some fragments will get through, but these are stopped by the layers of Kevlar that make up the flak jackets. The ceramic plates require a manufacturing process that uses, and produces, a lot of toxic chemicals, much of the production has moved to China.

The success of the plates, and the frequent attacks on U.S. troops in Iraq has led the U.S. Army to try and get enough plates for all troops in the combat zone, not just those in infantry units. This is more of a morale issue than anything else, as non-infantry troops are most frequently exposed to bombs and RPGs. The fragments from these weapons can be stopped by the flack jackets without the plates. But morale is important, so the army is trying to get enough SAPI plates for everyone.

The military plans to spend $6 billion on more XSAPI and ESAPI plates that many of the troops don’t want. Actually, those troops who don't have to run around a lot, like those running convoys through hostile areas, don't mind the additional weight of ESAPI. But for the infantry, less weight is a lifesaver.

These are the same folks that deny the "Dragonskin" body armor didn't meet specs during testing. If you don't know about "Dragonskin" stop by Soldiers for the Truth and take a look at the information and videos the NBC News had done in France....
light and after being hit at least 9 times with a high powered rifle (more than 7.62X39) not a single round penetrated the "Dragonskin"....
thats the body armor that I would choose....spend $6 billion for their retired generals and political friends and let the soldier/marine die on the battlefield....