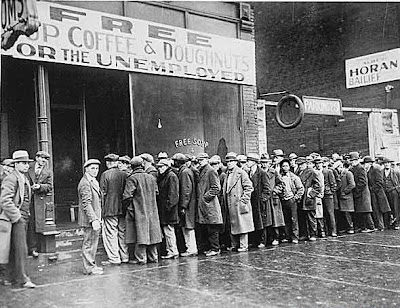 John Robb of Global Guerrillas has an announcement: "The Depression Scenario is Here."

Read it below, then go to the site and follow the links.

Maybe the Obamanoids shouldn't try to disarm us. They're going to NEED us to help keep order.

THE DEPRESSION SCENARIO IS HERE

The global Depression scenario is now dominant. Here are some of the drivers:
An utterly complete regulatory capture of the US government (the advent of the Obama administration has done nothing to change this). Regulatory capture is when monied interests take control of the government institutions that are supposed to regulate/control them. In OODA terms, this is a loss of control over the critical orientation phase of decision making loops. As a result, a vast looting of the government's coffers is now in process.*

The D-process (de-leveraging and deflation) feedback loop is now entrenched. This is a neat term developed by Ray Dalio of Bridewater Associates (Barron's interview).

The D-process is what happens (rarely) when too much debt is accumulated. Excess debt must be eliminated before growth can return. In the US case alone, excess debt load is $20-25 Trillion. Since global governments are unwilling and/or unable to wipe out the world's creditors (they've been captured), the process will drag on and on. Stimulus and bailout packages, constructed in a way to protect the wealth of the world's creditors/rentiers (looting), won't work. It will only prolong and deepen the failure as the D-process feedback loop intensifies.

A large number of countries from Japan to Spain to Latvia are already in depressions. These failures will serve as a drag on the entire global system, catalyzing the feedback loops of the D-process.

A global depression, in and of itself, isn't the end of the world. However, it can set in motion unexpected events (black swans) -- as in how the last depression catalyzed WW2. The revisionist effort to this economic collapse isn't likely to be a surge in ideology or nationalism. Instead, we can expect an organic realignment as small groups of people form new primary loyalties (either to violent manufactured tribes or resilient communities), slot themselves into open source movements, and challenge a wheezing group of incumbent nation-states. This is a global guerrilla century.

*NOTE: It's even worse than it appears. Here's an example of how terribly flawed Wall Street analytical modeling is. I suspect we now know what the people of Rome felt when things began to fall apart (they were likely apathetic and confused due to a reality distorting sphere of government spin).

we're going to become the de facto order, so, do not let it get to your heads. serve society, and to hell with the "officially sanctioned" servants.